Today you are in for a treat! I have author Linda Poitevin as my guest. She recently released her first book in audiobook format and she’s here to share a bit about the experience AND she’s giving away one copy of her new audiobook Shadow of Doubt. Please help me welcome Linda to the blog!

Jen: Greetings Linda and welcome to That’s What I’m Talking About. We are excited to have you share a little about making your first audiobook. First, can you share a bit about your recent release, Shadow of Doubt?

Thank you so much for inviting me to visit, Jen! I’m thrilled to be here…and to be able to share my excitement with your audience! Shadow of Doubt is indeed my first audiobook, and I’m practically dancing with glee over it. The book is an edge-of-your-seat romantic suspense that features Kate Dexter, a Canadian cop who quite literally runs into a man on a dark country road in the middle of a storm. Cut off from help, she loads him into her vehicle, only to discover that he’s also been shot. With her cop interest well and truly piqued, she takes him back to her parents’ farm and patches him up, intending to turn him over to the local force as soon as the storm lets up…except when he regains consciousness, Jonas Burke claims he’s a U.S. ATF agent who’s been framed for murder. One thing leads to another, and before she knows it, Kate finds herself on the run alongside him as they try desperately to get to the evidence he needs to clear his name…and to save both their lives.

Jen: So, Shadow of Doubt is an audiobook release only. Did you know when you wrote the story that it would be made into an audiobook? If so, did you write things a bit differently to accommodate an audio production? If not, did you have to edit the story for audio?

Shadow of Doubt is actually a story I wrote years ago that I’d bottom-drawered. I dusted off the story last year and rewrote it, releasing it on Wattpad a chapter at a time as I went. I intended to self-publish once it was complete, but just before that happened (I’d already had a cover designed and a copy edit done and everything, lol), Wattpad partnered with Hachette Books to turn 50 Wattpad stories into audiobooks…and Shadow of Doubt was one of them! So, to answer your question, no, I had no idea when I wrote (or rewrote) the story that this would happen. As for edits, the book underwent a second copy edit with Hachette (this thing has been edited within an inch of its own life at this point, lol!), but as far as I could tell, nothing was specific to the fact that the story was being produced as an audiobook. There will eventually be a digital version for sure, and possibly a print one, and those will be identical to the audio version. 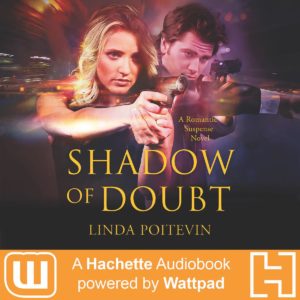 Jen: Did you have a hand in selecting your narrator, Desiree Fultz? Tell us more about that process.

I did! And it was all very exciting. Hachette/Wattpad sent me a list of three possible voice actors, and I was asked to listen to their samples and choose my favourite. To be honest, all three choices were excellent, but a couple of things drew me to Desiree: first, her voice sounded a bit more mature to me (my heroine, Kate, is in her thirties); and second, she was the only narrator of the three who made an effort to change her voice for different characters’ dialogue. That’s something I always did myself when I read stories to my kids, so I really liked that about her. I was so pleased when Hachette/Wattpad told me she’d signed on!

Jen: After going through this whole process, do you hope/plan/want to release a follow up audiobook?

Good question! While Shadow of Doubt was originally intended to be a standalone, I’ve since had ideas brewing in my mind for spin-off books. The same thing happened with my Grigori Legacy series and with my Ever After romance series, so it kind of seems to be the way I roll as an author, lol. So yes, I’d like to think there are more books in store for a series, and yes, I’d love to see them made into audiobooks. I’ve found the whole process to be quite enjoyable!

Jen: Do you listen to audiobooks? If so, please share a few of your favorite books and/or narrators.

My youngest daughter and my husband are huge fans of audiobooks, but I haven’t gotten into them much myself yet. I’ve listened to a couple while we’ve been travelling (Bill Bryson’s A Walk in the Woods is fantastic!), but I tend to prefer music when I’m driving and to nod off when I’m a passenger. I guess you could say I’m a listener-in-progress. 😉

Jen: Thanks for stopping by Listen Up! and sharing more about the making of the Shadow of Doubt audiobook. For more about Linda’s book and where to find it, please keep reading….

Thank you again for inviting me, Jen!


Helping him could end her career…
And her life.

Sworn to uphold the law, police officer Kate Dexter believes in doing the right thing. But when she meets an injured, altogether too sexy ATF agent, her entire world is turned upside down.

Jonas Burke is a wanted man. Framed for murder, he needs sanctuary–now. Finding it in the arms of a beautiful, feisty fellow cop isn’t exactly his best plan, but he’s desperate and wounded, and time is running out for him to prove his innocence. Armed with a little more than a conspiracy theory, Jonas has no choice but to ask for Kate’s help.

Kate is torn between her duty to “serve and protect” and her growing desire for this man on the run. With her colleagues in pursuit and Jonas’s enemies closing in, she and Jonas will have to work together if they want to survive. But can she really trust him beyond a shadow of doubt?

Linda is generously giving away a digital download audiobook copy of Shadow of Doubt to one (1) lucky commenter. (Prize is in the form of a digital download code.) To enter, please leave a comment at the end of this post letting Linda know Are you an #audiobook listener? Why or why not? And please feel free to give recommendations for your favorite audiobook or narrator! Be sure to include an email or twitter handle so I can notify the winner. (You can email me your contact information if you don’t wish to leave it in the comment.)

The giveaway is open until Wednesday October 11, 2017 at 11:59 PM EDT. The winner will be chosen at random from all eligible entries. Winner will be posted in the comment section of this post once the contest is concluded. This contest is open internationally where not prohibited by law. Open to participants, 18 years or older, who are legally allowed to participate in such a contest as allowed by their local laws. All federal, state, local, and municipal laws and regulations apply. Void where prohibited. No purchase necessary. By participating in the contest, participants agree to be bound by the decisions of the contest sponsor. Prize will be delivered by the author. This blog, its reviewers, and the owner are not responsible for items lost in the mail. By entering this giveaway, participants agree to abide by these terms.