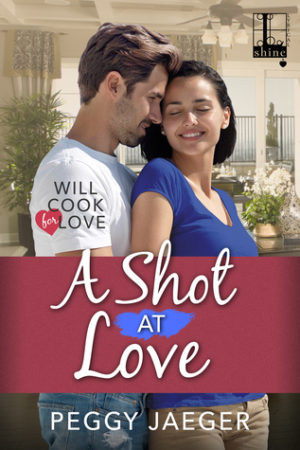 Agent Kyros (Ky) Pappandreos has been working on a mafia case for three years when the only witness is shot and killed on the streets of New York, along with two of Ky’s men. Photographer Gemma Laine happened to be in the right place at the wrong time. Capturing faces of New Yorkers for her next book, she witnesses and records the entire event on her camera… making her Ritandi’s next target.

When there is one attempt too many on Gemma’s life while she’s in FBI custody, Ky realizes he has a mole within his team, and takes her safety into his own hands. The pair hide out in a remote cabin and come to realize that while hiding away, they both have never felt more alive or free.

A Shot at Love is the second romance in the Will Cook for Love series. While the book takes place in the same world and involves the same characters as the first, it is a standalone read. And even with their similarities, the two books are unique and independent. A Shot at Love definitely falls more in the romantic suspense subgenre than the first title, which also contained a bit of action.

Ky and Gemma are a great couple. They share similar values and interests. They are both physically strong and mentally sharp. I enjoyed watching the pair as they each learned more about the other; each pleasantly surprised that their physical attraction is rooted in something deeper. It’s like I could feel the awe in each as they grew closer together, becoming more and more entwined. I especially liked that the professional aspect of Ky’s job and getting involved with Gemma is addressed and always on his mind. The author gives Ky support in the form of an additional protector, helping ease the way for the couple to pair up.

Ky and Gemma have a palpable chemistry that explodes when they touch, especially their first couple encounters. My only small complaint is that the pair is a bit goofy with their talk, in bed. They are silly in a way that made me think both are nervous, which may be exactly the point. Gemma has some serious trust issues, and the author does a great job developing the character. However, I wanted Gemma just to take charge and let go of her fears (which she does eventually!).

While I enjoyed the romance a lot, I did have an issue with the resolution of the mafia case. Trying not to be spoilerish, I need to say that there is NO WAY Ky’s plan to take down the mole would have happened as it did. And I’m not just talking about in the real world – but within the parameters of the story. I felt it was unrealistic and that bothered me.

In the end, I enjoyed Gemma and Ky’s story, regardless of how the case went down. I love that the author made Gemma and Ky real and that they were sexy and fell in love without thinking of or having sex during inappropriately dangerous times; there was work mode and non-work mode. A Shot at Love is action-packed and super sexy, and an enjoyable read.

My Rating: B/B- Liked It, but I had a small issue

Photographer Gemma Laine is looking for arresting faces on the streets of Manhattan when her camera captures something shocking—a triple murder. In that moment, she becomes a target for the mob—and a top priority for a very determined, breathtakingly handsome, FBI special agent. With deadlines to meet and photo shoots on her calendar, Gemma chafes at the idea of protection, but every moment she spends under his watchful eye is a temptation to lose herself in his muscular arms…

With two of his men and one crucial witness dead, Special Agent Kyros Pappandreos can’t afford to be distracted. But Gemma is dazzling—and her connection to Kandy Laine’s high-profile cooking empire makes her an especially easy mark for some very bad people. Keeping her safe is much more pleasure than business, but as the heat between them starts to sizzle, Ky is set to investigate whether they have a shot at love…

Reviews in the Series:
Cooking with Kandy by Peggy Jaeger (Will Cook for Love #1)