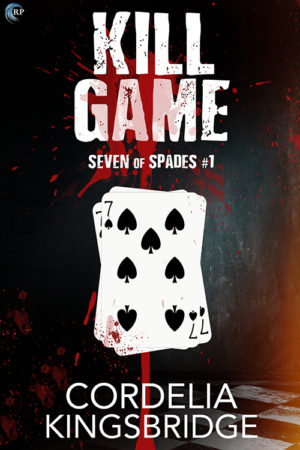 Given that I had mixed reactions to the only other title I’ve read by this author, I was eager to give this new series a try—and I’m extremely glad that I did. From its quick-witted characters to a villain that I found myself sympathizing with on occasion to a plot that kept me guessing the entire time, Kill Game had everything I adore in a good suspense story.

Although I did develop a particular fondness for Dominic, I liked both he and Levi a great deal. This isn’t the first time I’ve read a story involving a detective and a bounty hunter, and, while there was certainly the familiarity of strong dislike giving way to an improbable compatibility, nothing felt tired or overdone about either character. Chasing down a serial killer forces them to reexamine their own lives, more than their opinions of one another, and I enjoyed being so drawn in by the evolution of each man so far.

With Levi on the verge of an engagement to his long-term boyfriend, and Dominic disinterested in any relationship whatsoever, the author incites a more thorough examination of each character than would be possible if there was a rush to an immediate HEA. Whether it’s addiction, moral ambiguity in the absence of guilt, or the pitfalls of allowing affection to devolve into a kind of currency, there’s a lot to consider here. The use of dual narrators in this case not only allows readers to get to know the characters more thoroughly, but proved to be an effective means of sharing their perceived culpability.

One of the things I liked best about Kill Game is that, while the attraction between Dominic and Levi is undeniably there, this story is all about the suspense, rather than romance. Just as the killer exists between the law and “justice,” neither Levi nor Dominic seem likely to solve the mystery on their own. In fact, they make bigger strides when the lines get blurry, which kept the narrative as a whole from becoming predictable. Throughout the story, I examined and discarded plausible suspects, sometimes more than once, and was still delightedly second-guessing myself by the end.

Already, Seven of Spades looks to be an exciting, well-written series, and I’m happy to watch it unfold from the very beginning. Likable and imperfect, Dominic and Levi are a great match for one another, even though I wasn’t able to decide with any finality whether that was due to the complimentary aspects of their personalities or their disparities. Either way, I was engrossed from the first chapter, and am eager to see how things will play out as the series continues.

Homicide detective Levi Abrams is barely holding his life together. He’s reeling from the fallout of a fatal shooting, and his relationship with his boyfriend is crumbling. The last thing he’s prepared for is a serial killer stalking the streets of Las Vegas. Or how he keeps getting thrown into the path of annoyingly charming bounty hunter Dominic Russo.

Dominic likes his life free of complications. That means no tangling with cops—especially prickly, uptight detectives. But when he stumbles across one of the Seven of Spades’s horrifying crime scenes, he can’t let go, despite Levi’s warnings to stay away.

The Seven of Spades is ruthless and always two moves ahead. Worst of all, they’ve taken a dangerously personal interest in Levi and Dominic. Forced to trust each other, the two men race to discover the killer’s identity, revealing hidden truths along the way and sparking a bond neither man expected. But that may not be enough to protect them.

This killer likes to play games, and the deck is not stacked in Levi and Dominic’s favor.

Thanks for checking out the blog tour for Kill Game, the first book in the Seven of Spades series!

In poker, a “kill game” is a fixed-limit game in which the stakes are suddenly doubled when a player triggers certain conditions. As our heroes Levi and Dominic hunt for the vigilante serial killer Seven of Spades, the stakes have never been higher. 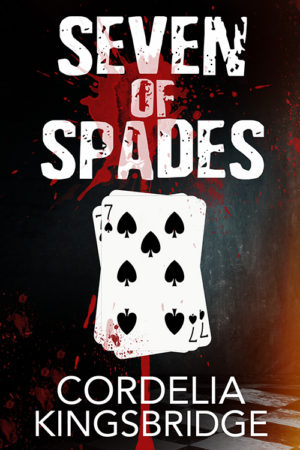 Check out the Seven of Spades series!

To celebrate the release of Kill Game, one lucky winner will receive a $15 Riptide credit! Leave a comment with your contact info to enter the contest. Entries close at midnight, Eastern time, on October 28, 2017. Contest is NOT restricted to U.S. entries. Thanks for following the tour, and don’t forget to leave your contact info!