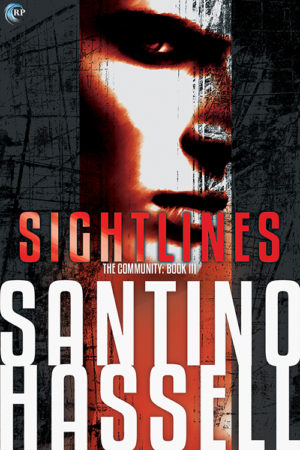 After thoroughly enjoying the first two books in The Community series by Santino Hassell, and having built up so much of my own anticipation for the third, I was very happy when Sightlines surpassed all my expectations. Essentially broken down into two parts—a brutal look at the insidious nature of “The Farm” and Chase and Elijah’s attempt to escape, followed by a reckoning for “The Comm” as a whole—this story weaves the previously unraveling threads back together into new possibilities, and gives some extraordinary characters a chance to truly live.

Chase has been a perplexity and source of fascination for me since I first read Insight, and Sightlines underscores that his presence in all three narratives is imperative. Both a prize and pariah, he’s too dangerous to be trusted, yet too unique and powerful to be eliminated. Reduced to a thing to be dissected with an eye towards replication, his story was tough to get through, mostly because the monsters here actually do exist in one incarnation or another in the world around us.

As he’s undergone what may be the most jarring evolution since the beginning of the series, I found Elijah to be similarly engaging in Sightlines. There’s a purity to him that’s still downright shiny in a lot of ways, and it’s no wonder that Chase finds himself as perplexed as he does. I also felt that Elijah’s loss of naivety beautifully intersected with the stuttering rebirth of Chase’s capacity to hope, and the resulting collision was as provocative as it was sweet.

What made The Community so terrifying to me wasn’t any single moment, but, rather, the fear, greed, and twisted purpose that might lead—indeed, has led—some to perpetrate the horrors we ought never be willing to inflict on one another. While it is a work of fiction, Sightlines makes several extremely pertinent affirmations about human nature, beginning with Chase’s early observation that:

From the beginning, Sightlines proved itself to be a strong and welcome addition to a series I’ve come to care about quite a lot. Chase and Elijah have long been a source of character-driven anxiety—in the best manner possible—for me, and I was very gratified with the way their story ended. Additionally, everyone I came to love from the first two books is back, an eventuality I admit to being especially greedy for. In the end, the series feels complete, I’m glad to have the paperbacks on my favorite bookshelf, and I’m looking forward to starting the whole thing over again soon.

Chase Payne is a walking contradiction. He’s the most powerful psychic in the Community, but the least respected. He’s the son of the Community’s founder, but with his tattoo sleeves and abrasive attitude, he’s nothing like his charismatic family. No one knows what to make of him, which is how he wound up locked in a cell on the Farm yet again. But this time, the only man he’s ever loved is there too.

Elijah Estrella was used to being the sassy sidekick who fooled around with Chase for fun. But that was before he realized the Community wasn’t the haven he’d believed in and Chase was the only person who’d ever truly tried to protect him. Now they’re surrounded by people who want to turn them against their friends, and the only way out is to pretend the brainwashing works.

With Chase playing the role of a tyrant’s second-in-command, and Elijah acting like Chase’s mindless sex toy, they risk everything by plotting a daring escape. In the end, it’s only their psychic abilities, fueled by their growing love for each other, that will allow them to take the Community down once and for all. 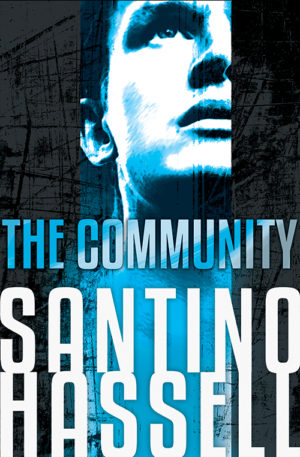 About The Community Series

What lies beneath the surface of the world you thought you knew?

Secrets and lies have twisted an underground community founded by psychics escaping persecution. Blackmail, sex, and social climbing in the name of power has created an irreparable rift.

In the eyes of the founders, there are two sides: loyalists and everyone else. Surely no one would emerge from their tightly woven webs. And they certainly wouldn’t sow the seeds of rebellion within the heart of the Community’s only queer night club.

Now an outcast, a scion, and a runaway are leading a revolution to save not only the men they love, but the entire Community.

Check out The Community series!

To celebrate the release of Sightlines, one lucky winner will receive a $15 Riptide credit! Leave a comment with your contact info to enter the contest. Entries close at midnight, Eastern time, on October 14, 2017. Contest is NOT restricted to U.S. entries. Thanks for following the tour, and don’t forget to leave your contact info!