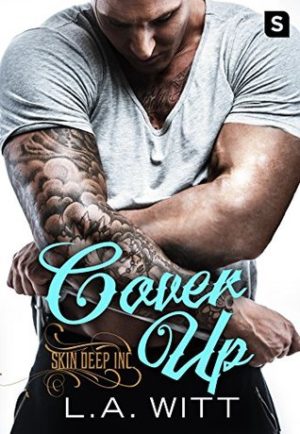 Cover Up
Author: L.A. Witt
Reviewer: B.
Rating: B+

Nate Chandler gave ten years to the man who ended up breaking his heart when he cheated on Nate—in their own bed. Never one for random hookups in the first place, Nate was left furious and unsteady when the forever he was counting on disappeared in an instant. Moving on would be so much easier if he could erase Caleb—and that matching tattoo—from his life. And isn’t it lucky that the “cover-up wizard” at the local tattoo shop also happens to be just as gorgeous as the art he creates?

Working two part-time jobs in addition to keeping up his apprenticeship at Skin Deep, Inc. doesn’t leave Lucas Brandt much time for anything else. Especially not romance, given his history of bad decisions and more recent pattern of disastrous sexual encounters. Even so, he can’t deny the undeniable heat that the recently separated and still hurting RIO stokes in him from their very first meeting. And, really, if being with Nate feels this good without any strings attached, there’s no way Lucas is going to fight it.

Having met Nate and Lucas in the previous story, Pounding Skin, it was fairly easy to jump right into Cover Up without any backtracking. Lucas, in particular, piqued my interest before, so I was very excited to see how his story might play out. For most of the narrative, I stayed connected to what was going on with Lucas and Nate, and was either eager for them to sort things out or worried that the overall surface was too smooth by turns. It wasn’t until the relationship was still predominantly rooted in the bedroom when both men’s feelings had clearly evolved further that I began to hope for more.

Although I liked each of the main characters, I definitely have a particular fondness for Lucas. Open about his sexuality, his major worries are about paying off his student loans and getting his confidence back after a mistake on a tattoo leaves him rattled. As for his relationship with Nate, he knows exactly what the situation is, but is just happy to feel good when he can, and makes a conscious choice to let himself keep falling. When he finally realizes that things can’t continue as they had been, I couldn’t help hurting for him.

As I have an admitted weakness for returning characters that I like, Cover Up had plenty to keep me happy. In addition to seeing Matt and Jon again, the entire Skin Deep, Inc. crew make repeated appearances, and Colin and Daniel (from Back Piece) have a couple of extremely significant scenes that I loved. Daniel had been away on a six-month deployment, and the reunion was certainly a good one.

Overall, I think Cover Up is a nice addition to the Skin Deep, Inc. novels. Nate and Lucas were a good match for one another in quite a few ways, though I’d have liked to have seen more of them out in the world, either alone or together. While the sex scenes did get a bit repetitive, I still wanted them to work everything out a great deal, and I believe that solution they arrived at is right for them—for now. Although each story can be read as a standalone, I highly recommend reading them all from the beginning, especially since some of the other characters feature so prominently here. I’m not sure if there will be another in this series, but I’d be happy to see everyone again, regardless.

After ten years of blissful marriage, Navy Pilot Nate Chandler is divorcing his cheating husband. Single for the first time in years, Nate is numb to all emotion and kisses any chance of another relationship goodbye.

Not only is Nate struggling to get through this divorce, but his body is branded with a permanent reminder of his failed marriage: a matching tattoo with his ex. Searching for a place to cover up his old tattoo, Nate finds himself at the Skin Deep, Inc., where he meets the young and charming cover-up tattoo apprentice, Lucas Brandt.

From just flirty glances to steamy hot encounters, Nate and Lucas dive headfirst into a fling of hookups. But worried that he’ll forever be Nate’s “cover up” rebound relationship, Lucas fears that their love won’t be anything more than just skin deep. What was once just a casual attraction, Lucas now hopes to turn into a real relationship. But will he be able to convince the still tender-hearted Nate to fall in love again?