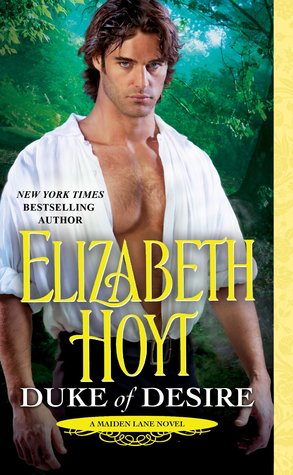 Duke of Desire jumps right into the thick of things, with Iris, the Lady Jordan, kidnapped four days ago as she departed from the Duke of Kyle’s wedding. She is currently bound on an alter in front of the masked Lords of Chaos who are arguing over Iris’s identity, confusing her with the new Duchess of Kyle.

Raphael, Duke of Dyemore, is working to infiltrate and eliminate the atrocious Lords of Chaos, the group his father once proudly ruled. Seeing the innocent Lady Jordan held captive on his own lands pushes him to take action. Demanding she be his to use, he hauls her away, in an effort to save her. However as circumstances become dangerous for Iris and Raphael, he insists marriage is the only way he can protect her.

As a late-comer to the wonderful Maiden Lane series, I was sad to learn that Duke of Desire is the last novel in this delightful world. While this book isn’t my favorite of the series, it puts some issues to rest and leaves readers with a happily-ever-after epilogue. I enjoyed the story, but I felt the plot revolving around the Lords of Chaos and Raphael’s revenge overshadows the romance.

Iris is a strong woman and wonderful character. She’s a different type of heroine from many that I normally read. Rather than push to get her way, she decides she shall convince and plot. Rather than stand up, she goes along, keeping faith and hope she’ll turn things around. She knows what she wants, and is willing to temporarily “settle” for less, with the hope she will get through Raphael’s defenses eventually. Not that she’ll wear him down, but rather that she’ll help him realize there is more to life than revenge. But her nature causes her to appear complacent at times, and I wanted to her to fight harder for herself and those she cares about. It’s a good thing I’m not Iris, or the author, or I’d have ended up pushing Raphael away permanently!

Raphael was left emotionally, physically, and mentally damaged by his father and a horrific childhood. Even though his aunt was able to help him escape the dangers at home, Raphael’s memories will never let him rest. His mind is warped; convinced he will end up a monster like his father. While Raphael’s behaviors and attitude are probably genuine and possibly even a bit tame for someone who suffered as he did, it seemed to overwhelm the story. I wouldn’t want an author to ever minimize abuse or its life-long impacts; but I wanted more dimension from Raphael, instead of a man so focused on the negative in his life. Again, it’s not the author’s fault, it’s just my preference.

In the end, Duke of Desire is another delightful tale set in Ms. Hoyt’s historic England. Filled with robust intrigue, a sweeping plot, and steamy encounters, the book brings to close an overarching plotline, while allowing Iris and Raphael time to get their HEA.

A LADY OF LIGHT

Refined, kind, and intelligent, Lady Iris Jordan finds herself the unlikely target of a diabolical kidnapping. Her captors are the notoriously evil Lords of Chaos. When one of the masked-and nude!-Lords spirits her away to his carriage, she shoots him . . . only to find she may have been a trifle hasty.

A DUKE IN DEEPEST DARKNESS

Cynical, scarred, and brooding, Raphael de Chartres, the Duke of Dyemore, has made it his personal mission to infiltrate the Lords of Chaos and destroy them. Rescuing Lady Jordan was never in his plans. But now with the Lords out to kill them both, he has but one choice: marry the lady in order to keep her safe.

Much to Raphael’s irritation, Iris insists on being the sort of duchess who involves herself in his life-and bed. Soon he’s drawn both to her quick wit and her fiery passion. But when Iris discovers that Raphael’s past may be even more dangerous than the present, she falters. Is their love strong enough to withstand not only the Lords of Chaos but also Raphael’s own demons?