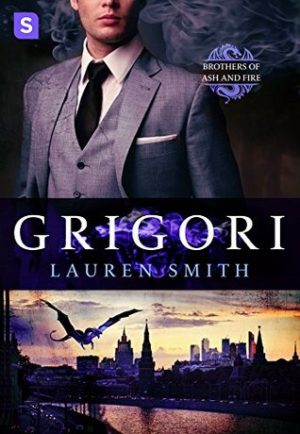 Grigori is the debut novel in the Brothers of Ash and Fire series.  Gikany and Una were interested in this new urban fantasy series focusing on dragon shifters.  We were pleasantly surprised that it is not just about dragons shifters and, although there were a few odd notes, we liked our introduction to this new world.

The premise and mythology of the dragon shifters was interesting.  We did, however, wonder how they could even attempt flying in dragon form, no matter how rural an area is, with satellite surveillance and other modern technology.  Despite all of that, it was fascinating to imagine Grigori flying in his stunning dragon form.  Grigori’s immediate desire to mate with Madelyn upon catching her scent made perfect sense.  So did his chivalry:  Grigori is thousands of years old.  This longevity was overshadowed by a sense of melancholy.  Considering how small the Barinov family is and how few close companions they must have, their melancholy is not surprising.  It was most notable in some of the interactions between Grigori and his brother Rurik.

One thing we felt was odd about this story is an issue that centers on Madelyn.  Even in this modern age, a single woman would hesitate to venture into a country alone with only a basic understanding of the local language.  It just doesn’t seem prudent or safe.  Then after Grigori kidnaps her, the instant and overwhelming attraction she has for him is bizarre.  She even jokes about how she is suffering from Stockholm syndrome.  Their “courtship” is rather terse and although the romance is sizzling, the fuse was quite short.  We understand the drive of mating, but Madelyn’s reaction was unexpected.  In the end, we loved how the truth revealed itself.  We liked the allusion to Romeo and Juliet’s infamous love story.  We hope to see Grigori and Madelyn in the next novel.

Overall, we liked this new take on modern day dragon shifters.  Although this first novel is a little clunky with its odd notes, the flow of the story and romantic journey of Grigori and Madelyn more than compensated.  We look forward to reading about Grigori and Rurik’s lost brother, Mikhail, in the next Brothers of Ash and Fire novel.

Grigori Barinov is the eldest in an ancient line of dragon shifters and the guardian of his family’s lands and fortune. Sworn to protect their history and magic, he won’t rest until he neutralizes any threat to their existence. When he discovers an ancient manuscript that exposes his family and their dragon lineage has fallen into a mortal woman’s hands, he knows he must get the book back by any means necessary. If that means seducing a nosy American woman with an intoxicating scent, he is more than willing to carry her off to his palatial home deep in the heart of Russia.

Madelyn Haynes has never fit in. As an adopted child she grew up in a loving home but never felt as though she belonged. Plagued by mysterious dreams she’s had of a silver scaled beast ever since she was a little girl, she is convinced dragons are real. While in Russia working on her PhD in mythology in order to escape the ridicule from fellow professors, she unexpectedly crosses paths with the sexy and dominating Grigori, and after just one night with the man whose eyes seem to burn, she starts to change inside. Isolated in the Russian wilderness Grigori calls home, Madelyn can’t help but fall under his sensual spell, yet something deep inside her calls out that she can’t trust him. She has to show the world dragons are real to salvage academic reputation, even if it means costing her the heart of the dragon she’s falling in love with.