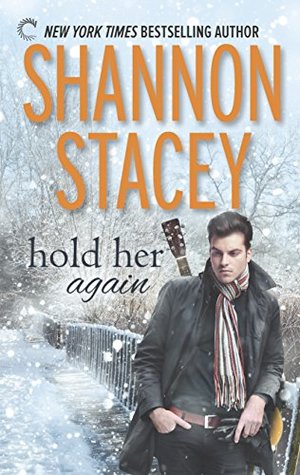 Ava and Jace were a perfect match; young and in love with big dreams of marriage, a family, and a country-music singing career. However, that all ended the night Jace left Ava behind and headed to Nashville with a solo singing contract in hand. Now Ava has spent the past five and a half years trying to make a life for herself and getting over the one man who held and then broke her heart. Meanwhile, Jace has spent the same time becoming a music sensation with only one regret: walking out on Ava.

Hold Her Again is another delightful (and probably my favorite) holiday-themed romance novella from Shannon Stacey. The night that Jace walked away to make it big was the night that Ava gave up on all of her dreams. Right from the start of the book, I was all “Team Ava”, and I couldn’t conceive of any situation that would put the pair back together. There is absolutely no doubt that Jace made the wrong choice five and a half years ago, and Ava’s hurt is deep. But Ms. Stacey puts together a genuine reconciliation that had my heart beating faster and brought a few tears to my eyes. It is hard to get over that kind of soul-deep hurt, but it is equally difficult to show honest regret and prove the apologies are sincere.

Ms. Stacey won me over with small gestures, while simultaneously moving the couple closer together over a short period of time. And it works because it is obvious this couple never stopped loving one another.

“The connection between them was still strong, and she thought of it like an invisible tread that was slowly darning the hole he’d left in her heart.”

Ava and Jace have that true love that lasts because they are “meant to be”, and after time, they realize second chances are worth the risk.

Ava Wright isn’t happy to see her high school sweetheart rolling into their hometown a few weeks before Christmas. He’s only come back to bury his estranged father, but there’s no way she’ll be able to avoid him. No one can: he’s become a country-music superstar since going solo and leaving Ava behind.

Jace Morrow grew up believing “money can’t buy happiness” was something people said to make themselves feel better. But now he knows it’s the truth: no matter how many number-one hits he has, he’ll never recapture the magic of singing with Ava. Missing her—loving her—and living with making the wrong choice in life were what made him who he is.

When Jace is roped into being part of the town’s annual Christmas party, he only cares about earning Ava’s forgiveness. And though Ava’s heart has never healed, she loved Jace too much and for too long to shut him out when he’s hurting. As they fall in love all over again, they’re both faced with choices for their future…and this time Jace intends to make the right one.