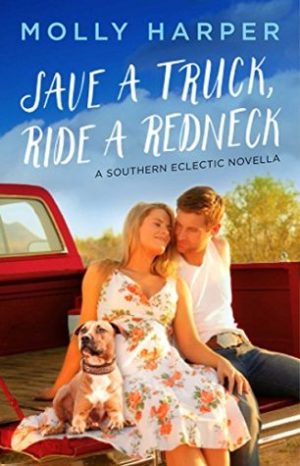 Heading back home to spend the summer before going to law school, Marianne begins to question her life goals and dreams. She’s always feared being stuck in small-town Sackett, Georgia, but now the idea has a little more appeal, as long as she can maintain some distance between herself and her large family.

Carl and Marianne were high school sweethearts, but when Marianne thought Carl might propose before Marianne headed off to college, she panicked and left him. After four years, the sparks are still there, but can they move forward instead of looking back?

Save a Truck, Ride a Redneck is a short novella that kicks off the new Southern Eclectic series by Molly Harper. While not full of Ms. Harper’s usual snark and wit, the story is sweet and charming. However, I’m a bit curious as to its place in the series. I say this because there is a HUGE spoiler in the beginning of the book: a family tree which shows Marianne and Carl married with kids, as well as the death a major character who is still alive in this story. I really wish the family tree had been left out of the novella, and added once the series had progressed to match what the graphic displays.

Other than that little issue, Carl and Marianne share a sweet romance. The novella sets the stage for the upcoming series by developing the basic framework of the world. Save a Truck, Ride a Redneck was entertaining and engrossing enough that it got me interested and invested in the characters, and I want to know more about the McCready family.

My Rating: B/B- Liked It, but I had a small issue

Carl and Marianne were high school sweethearts, loving the way only teenagers can—with no thought to logic or pride, just a bone-headed, optimistic frenzy of unicorns and hormones. That was all they needed. Or so Carl thought.

Scared of being stuck in Lake Sackett, Georgia, like so many of her friends—without a real shot at a future or achieving her own dreams—Marianne panicked and bolted to college after stomping Carl’s heart into the high grass. But when she returns to Lake Sackett for the summer with her family after years away, she and Carl are drawn together like moths to a flame. As they rekindle their old romance and remember what it was like to be in love, they have to wonder: is this, finally, their real chance at happiness?