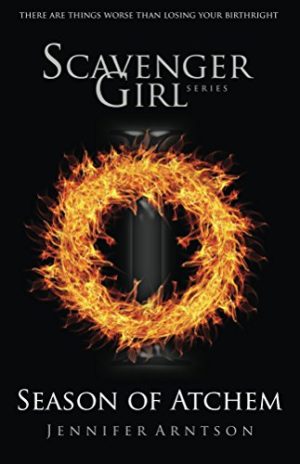 Scavenger Girl is the first book in the new young adult series by the same name.  It’s told from the perspective of Una, a seventeen year old girl and member of the lowest caste in a leveled socio-economic system.  This dystopian novel is set on a planet with three moons that with their movements create five distinct seasons: Atchem, Talium, Hytalia, Toridia, and Zoetica.  The seasons correspond to the five books intended for the series.

The single perspective creates a very intimate feeling with the narration.  The pace isn’t slow so much as it feels like real time, not skipping or jumping over large days or weeks. Arntson’s methodical writing style reminds me of Lois McMaster Bujold, author of the Sharing Knife series. The story is told day by day at the end of Atchem season, leading up to Talium, the dark season when the moons line up to block out the sun in a perpetual total eclipse. Nothing grows, it’s always night, and even rivers are affected by gravitational pull.  In a largely agrarian society, the ability to produce food and goods is significant. Productive farmers tend to be wealthy—if they are “citizens.”

“Citizens” have standing and privilege.  They worship a pantheon of gods and approve of human sacrifice.  “Reclaimers” are those who have lost or never had a birthright.  They are not entitled to own anything, but what they can scavenge or reclaim from the castoffs and trash of citizens.  This includes their own children.  Girls reaching puberty are sold into surrogacy and slavery.  The contrast between the citizens and the reclaimers is stark, characterized by have and have-not at its basic level and graphically violent at the extreme.  That violence feels very personal since we are intimate with Una and her family.  Some sensitive readers may be triggered.

At its heart, however, Scavenger Girl is a love story.  When Una has the opportunity to secure the safety of her beloved family by virtue of a betrothal to a citizen farmer, she gets to live a Cinderella fairytale—or is it?  Can she fit into this parallel culture for the sake of her family?  I have a few minor criticisms, but mostly, I was impressed.  Arntson made me remember what a teenage, real first kiss felt like.  I’ve been married 30 years so that’s saying a lot.  I read enough romance that I was stunned when Arntson took me there, led gently by the hand so it felt new.

There is a large annual festival prior to the start of Talium and the book builds toward that event.  The love story climaxes at the end of the festival as Talium begins, but it is not resolved.  The series clearly needs to be read in order. I’m very much looking forward to answers for characters I came to like and, I hope, enough story to justify five books.

Arntson is serious about her series.  There is an interactive website dedicated to just this series and twitter accounts for each of the main characters already set up.  Arntson wants readers to interact with the website, her characters, and each other.

Stripped of their birthright and shunned by the Citizens of Ashlund, Una and her family are forced to live on the fringe of society as Scavengers.  When the family suddenly experiences a sudden change of circumstance, Una takes new freedoms, free from the Authority, her family and possibly her fate. Pulled between the life she’s always known and a world where status and rituals are everything, Una struggles to understand a culture that has rejected her family and celebrates death. Time is running out, and she can’t help thinking about what she fears the most: the coming of her Womanhood and the subsequent price when she’s taken to the Seller’s Stage. As the festival of the Three Moons draws near and she learns who she really is, will Una find the courage to do what it takes to ensure her families survival, or will she find the faith to follow her heart?