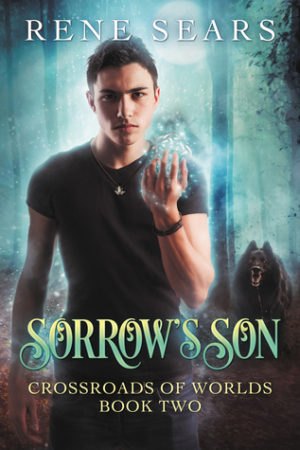 Sorrow’s Son picks up shortly after where Strangehold ended. Though it wasn’t what I was expecting, I did enjoy this next installment of the continuing collision of two different dimensions.

When I initially picked up this series, I thought (mistakenly) that Morgan would be the main character POV through the series.  This isn’t the case.  Though I really enjoy Morgan, this older witch and the romantic tension between her and Rowan, I was surprised by how fascinated I was with Javier.  It was fairly easy to figure out who Javier is, but it was not easy to figure out what his mother’s family is.  I hope we learn more about this branch of his family.

If you thought you knew where the story was going to go, trust me you don’t.  I was surprised and intrigued by all the different ways the story twisted.  We were introduced to different aspects of Strangehold.  I enjoyed watching Javier relax and trust Morgan and the group.  However, I worry about the ramifications some of Javier’s choices will lead.  He has had enough hardship and I hope this path is one that will lead him to happier places.

Through this novel we learned more about Igraine and Iliesa. Seeing their magic use through Javier’s eyes was fascinating and I eagerly anticipant the next novel as it seems to be from their point of view.  So much happened in this novel, connections broken and people twisted – I hold on to hope that divisions can be healed without the blood sacrifice that seems to be implied.

If you enjoy urban fantasy with Fae and witches, you might really want to pick up this intriguing Crossroads of Worlds series.  Though it wasn’t what I was expecting, I found it engrossing and intriguing.  The plot moved in unexpected ways with fascinating twists.  I eagerly look forward to finding out what happens next.

Orphaned during the Savannah Flu, Javier is looking for other spellcasters without knowing if any survived. When he finds a caster named Morgan and her nieces, Igraine and Iliesa, he has to hide the secret of his isolated upbringing, desperate not to alienate the only community he has left.

But Igraine and Iliesa have secrets of their own. The wild hunt comes to the mortal world seeking them. Why the Queen of Faerie wants them, no one knows, but no one wants to hang around to find out. Javier flees with them between worlds, finding a rare talent for communicating with fae creatures—though he’s sure his father wouldn’t have approved of his new hellhound.

A mysterious man claiming to be from his mother’s estranged family finds Javier, but does he want to claim the family his mother repudiated? He must choose whether to go to his mother’s family or help his new friends—but it may be too late to escape the malevolent gaze of the Queen of Faerie.

Reviews in the Series:
Strangehold by Rene Sears (Crossroads of Worlds #1)