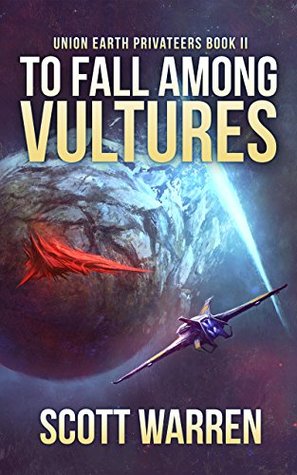 To Fall Among Vultures is a solid addition to the Union Earth Privateers series.  I found the writing to be equally as good as the first book, Vick’s Vultures, with the same exception that I noted before, that of repetition. (I read from an advance copy and it may be those few spots I took issue with are changed in final editing.)  Calling upon his own training as a pilot, Warren helps us to mentally visualize extensive battle scenes.  They feel authentic, if a little drawn out. The reader is definitely in the middle of the action as the point of view shifts through the perspectives of different participants in the fight. I wanted to see the movie the same way I wanted to see the campaigns in Orson Scott Card’s Ender’s Game.

Like Star Wars’ The Empire Strikes Back, there has to be that middle book which gives us very important information, but maybe doesn’t have the final ending we want.  Truthfully, after reading To Fall Among Vultures there’s such a surprise (I won’t spoil it for you) that I’m not even sure what I want from book three.  It brings up major questions that need major answers, but until I read this book, I didn’t know to ask them.  Readers of speculative science fiction like to speculate and when the author is a step or three ahead of the reader—well, it’s just fun.

The strength of Vick’s Vultures was watching humans overcome incredible odds, take advantage of opportunity, and make noble sacrifices—things we like to pat ourselves on the back for as a people.  In To Fall Among Vultures, Warren explores our flaws.  Most significantly, as the story becomes more fantastic, it remains plausible where the flawed Earthlings we know are the heroes and the bad guys.  Warren handles it well and maintains my good opinion.  I’m looking forward to book three.

Humanity has spent decades carefully establishing a quiet foothold in an uncaring galaxy brimming with hostile powers. That all unraveled six months ago when Captain Victoria Marin and her crew of Vultures stumbled into the center of a conflict between two of the galaxy’s three apex civilizations.

Eager to get off the intergalactic radar, the Vultures spent the last six months laying low, running routine salvage and recon missions for the Union Earth Government. The scavenged xenotech they and the other privateers ship back to Earth are crucial to securing humanity’s place among the stars.

But fate has other plans for the Vultures. When an alien Commander shows up on her doorstep offering Earth its first true defensive alliance, Vick has no choice but to pledge her crew of crafty privateers to their cause. Vick and her Vultures are drawn into a grudge almost a thousand years in the making, and survival for one race could mean extinction for the other.