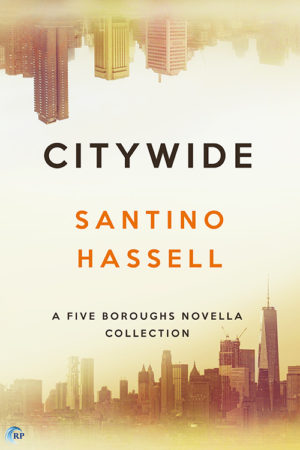 “For everyone who couldn’t get enough of Jaiden and the Queens Crew. This anthology is for you!”

This introduction by the author very neatly sums up everything most fans of the Five Boroughs series need to know about Citywide. Fascinating, complex, and impossible to overlook, these originally supporting characters’ voices resonated so strongly throughout the previous stories that the notion of the series without them has become unimaginable. So, it was with an inordinate fondness and eagerness that I began reading Citywide, and ended up caring even more deeply for each and every one of them by its end.

“Rerouted”
As previously noted, Chris, Jace, and Aiden have been favorites of mine since they first appeared in the series, and theirs was the story in the collection I was looking forward to the most. Chris has illuminated every scene he’s been in, while Aiden and Jace have always made me crave to learn anything about them that I could. Serving as both introduction and HEA, “Rerouted” exceeded all my expectations, starting Citywide off with as hopeful a beginning as I could have wished for.

“Gridlocked”
Tough, judicious, and fiercely loyal, Tonya has likewise commanded my interest whenever she’s appeared in the Five Boroughs stories. While she could have been cast solely as the Queens Crew’s walking reality check, it was always evident that she was much more. As the outrageous—though equally devoted—heiress and sidekick, Meredith has evolved quite a bit since her first appearance, and made a more compelling match for Tonya in Citywide than I initially expected. While I imagined I’d enjoy “Gridlocked” primarily for the chance to get to know Tonya better, I was both surprised and very happy that the pair got the new start they did.

“Derailed”
As the only one of these novellas that focuses exclusively on two of the original members of the Queens Crew, “Derailed” was the most difficult for me to read. The history Stephanie and Angel share is complicated, even taking into account the intimacy of their larger group, and the battleground they’ve taken up residence on for so long is downright brutal. They know each other far too well for their story to be either sweet or pretty, and it occurred to me at the halfway point that a glass of wine or three would have been welcome. Jagged and sometimes devastating, their HEA seemed the most hard-won of the bunch, even though I don’t believe it could have happened any other way.

Sometimes dark, but often perfect, Citywide should be a must-read for any longtime follower of the Five Boroughs series. While I enjoyed all three novellas tremendously, it was “Rerouted” that completely stole my heart. There’s not a thing I didn’t like about Chris, Jace, and Aiden’s story, and watching them find the love they’ve wanted for so long made me ridiculously happy. With the addition of Citywide, Mr. Hassell has again demonstrated that he is a unique and gifted writer, as well as reaffirming that Five Boroughs is one of the best series in the genre.

A record-breaking heat wave engulfs the Five Boroughs, and emotions run as hot as the temperatures.

In Gridlocked, former Marine Tonya Maldonado is keeping real estate heiress Meredith Stone on permanent ignore. Mere isn’t Tonya’s type. Not even close. Who cares if she kisses like a dream and has the filthiest mouth this side of the East River? But then a security detail at a summer party ends with her saving Mere’s life and discovering they have more chemistry than she’d ever imagined.

In Derailed, Stephanie Quinones escapes the heat and her complicated love life by going on a company retreat. Trouble is, it’s a couples’ retreat, and she lied about having a boyfriend. Unfortunately, the only person willing to play pretend is her on-again/off-again fling, Angel León. They’re currently “off again,” but after a week in the woods, Stephanie realizes she wouldn’t mind them being permanently on.

About the Five Boroughs Universe

New York City—home of soaring skyscrapers, concrete boulevards, and the hopes and dreams of millions. A city where opposites attract and romance is found in unlikely places. From the glittering penthouses of Manhattan to the blue collar neighborhoods of Queens, values get tested, cultures clash, and connections made. Men of diverse backgrounds examine their lives, test their sexual boundaries, and seek success in an unforgiving urban landscape that moves fast and stops for no one. Despite the odds, there’s love to be found in the five boroughs as long as they’re willing to work for it.

To learn more about the first three books in the Five Boroughs universe, please visit http://santinohassell.com/books/

To celebrate the release of Citywide, one lucky winner will receive a $10 Riptide gift card! Leave a comment with your contact info to enter the contest. Entries close at midnight, Eastern time, on November 18, 2017. Contest is NOT restricted to U.S. entries. Thanks for following the tour, and don’t forget to leave your contact info!