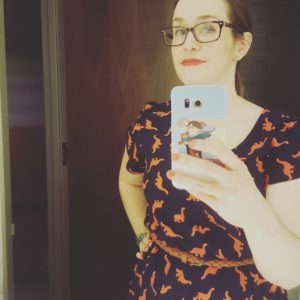 Sionna Fox has been writing stories her whole life. Her first book was about dinosaurs, and according to her mother, it was adorable. She was late to the romance game, but hasn’t looked back since picking up the habit and firmly believes romance novels can save your life. She lives in New England with her very patient husband and a very put-upon dog.

I’ve been here for almost eleven years, and I grew up in Massachusetts and went to college in Vermont, so I’m a New Englander through and through.

It does. From the small communities to the landscapes, it’s almost like world-building background noise.

Wolf Summer is set in a fictional version of the White Mountains, crossed with a tiny bit of the Vermont town where I went to college. Even when I’m being vague about a setting, in my head it’s probably New England-like, because it’s what I know. I’d be interested to hear where readers think my books are set, though.

Fall. There’s something about the light and the leaves, (and the relief from summer’s humidity) that gets me. I love spring, too, especially in the mountains, when everything is thawed and turning green.

The novella Wolf Summer is included in Mated: A Paranormal Romance Shifter Anthology from Carina Press 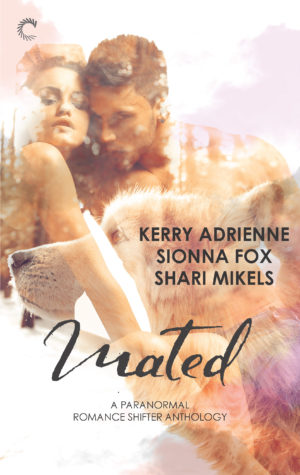 A woman born blind and without the ability to shift yearns to seek her own fate away from her watchful, devoted wolf pack. Vulnerable and stuck in human form, she’s alone and at risk when she’s rescued by the bear shifter who is her destiny.

An accident forces a man to change the best friend he’s loved for years…or leave her for dead. There’s no reason to hide his true self anymore—but can she ever forgive him?

And a pack alpha finds that rescuing his fated mate from a violent confrontation with two wolf shifters is easy. Helping her move from fear to acceptance of the animals—and him—is a challenge.

This anthology includes:
Saving His Wolf by Kerry Adrienne
Wolf Summer by Sionna Fox
Drawn to the Wolves by Shari Mikels

Sam found Callie slumped over and nearly passed out when he returned with water, and forced her to sit up. She didn’t want to. She tried to wrench her arms out of his grip but he was stronger and far more sober than she was. He hoped some part of her recognized that she was very, very drunk and he had done the right thing to pull her away from the fire and try to get some water in her. If she did, it didn’t keep her from struggling to fold forward again.

“Cal, you need to drink some water.”

“Uh-huh. Says the girl who almost tipped a bottle of rum into the fire.”

Her eyes went round. “Whoops.” Apparently even this drunk she could understand why that was a bad thing.

“Come on, drink some water, then I think it might be time to go home.”

“What? No.” She screwed her face into a glare and if he wasn’t worried about her, it would have been cute. “Don’t tell me what to do, Sam. You’re not actually my brother.”

He winced at her slurred words. It was good to hear her say it, even if it took tequila and rum and God only knew what else she’d been drinking for the words to come out loud. “No, I’m not. But you’re my best friend and you’re wasted. I’m cutting you off and taking you home.”

She wobbled to her feet. “Fine. I’m going home. You don’t want me here anymore.”

She’d gone from whiny and almost passed out to angry in the blink of an eye. Callie wasn’t usually mean or dramatic when she drank, but maybe that last swig of rum got to her. He’d also never seen her this drunk. She was usually the responsible one, not edging too far past tipsy before she cut herself off and sent herself home for water and bed. She tried to make a grand exit, but tripped over her flip-flops and almost toppled over.

Sam rushed to her side and tried to help her but she kicked off her sandals and trundled barefoot toward the porch. He picked up her shoes and watched her shamble down the driveway. He wasn’t even sure he should let her go home at all. He wanted to pick her up and take her inside where he would be able to keep a watch on her all night. What would he do if she went back to her place only to choke on her own vomit when she passed out? No. He couldn’t let her be alone.

She was moving faster than he would have thought possible. She had made it to the end of their driveway and was in the middle of the crosswalk on Main Street when she turned around and stumbled. Sam would never be sure if he started running because she was about to fall in the middle of the street, or if he ran because he heard the rumble of a truck’s engine moving way too fast through town.

It happened in slow motion. A black pickup, no headlights on, barreling down the street. He must have yelled, he heard his voice in his head. Heard tires squeal, the sickening crunch of impact, and the sound of a truck peeling out, fleeing the accident. Then flickering scenes. Callie’s body on the ground. The feel of his knees hitting pavement. Her broken, bleeding body in his lap, the sound of her heart frantically struggling to beat, the gurgle of her lung, filling with blood where her rib had punctured the fragile flesh. She was dying in his arms.

Feet running up behind him. Bren’s hand on his shoulder.

Sam pushed him away, the need to shift rising in him, driven by fear and desperation. He couldn’t lose her.

“She won’t last that long.” Her pulse was getting weaker, her breaths more ragged and shallow.

“Think about what you’re doing. She wouldn’t want this.”

“She wouldn’t want to die.”

“She wouldn’t want you to give up your life for her, either.”

Sam made a keening sound in the back of his throat. Her blood pressure was dropping as her body started to shut down. He could make them understand. Make her understand. But she had to be alive for him to have the chance. He’d accept the consequences—censure, exile, containment. Whatever they would do to punish him would be nothing compared to the pain of losing her.

“I can’t let her go, Bren.” He clutched her limp body and listened to the blood and fluid pooling in her lung and her belly while her heart raced against her tumbling blood pressure.

Gingerly, they scooped her up and brought her into the shadow of the maple trees that surrounded the school fields where they’d spent their childhoods playing tag and throwing snowballs at recess. Sam let go, gave rein to his fear and let the wolf rise.