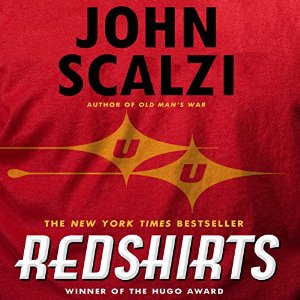 As a fan of the original Star Trek, all spin offs, and the movies, I was giddy with the very concept of Redshirts. Primarily following Ensign Andrew Dahl as he begins serving on the UU Capital Ship Intrepid, the story takes listeners on a wild journey that both mocks and glorifies the original TV show. From ridiculous situations that are solved with a mysterious “box” to an abnormally high death count of the newest recruits, the story follows Dahl as he tries to figure out why such ludicrous events keep happening on the Intrepid.

With so many references to the original Star Trek, and the overall atmosphere of early science fiction shows, I do not recommend Redshirts to the casual listener. The book bases its entire story on being able to find the humor in some of the situations provided from the original show, and if you cannot understand that, the book may seem pointless. Additionally, the “science” of the story becomes quite involved and difficult to follow, especially if you have no interest in the concepts behind shows like Star Trek. In fact, the characters even joke how they are using the shotty world-building to benefit them. However, I am one of those types who find this all entertaining, so I enjoyed the adventure, laughing out loud at times.

One thing that did disappoint me was that the larger picture was left so vague. I know it was written to be deliberately obtuse, but the engineer in me wanted more explanation. Also. The codas. I’m not sure why they were included. The last three sections of the book are told from three different points-of-view of off-ship characters. They don’t have any impact on Dahl and his timeline. However, it was interesting to see how they all connected.

As for the narration, I was on the fence about Wil Wheaton. I mean, come on! It’s Wesley himself, bringing to life characters on a star ship. I love that aspect. And Mr. Wheaton does have an entertaining, engaging voice. However, he doesn’t perform the story as much as he reads it. He doesn’t really make much attempt to change voices for any of the characters. He adds some emotions, but I’ve heard better. And a huge issue with Mr. Scalzi’s writing style which comes out in audiobook format, is the shear volume of dialogue tags. I was SO ANNOYED with the “Dahl said. Duvall said. Dahl said. Jenkins said. Dahl said…” you get the point. Mr. Wheaton did nothing to soften those tags.

In the end, I enjoyed Redshirts and strongly recommend it to fans of the original Star Trek and the zany antics of the USS Enterprise. Funny, strange, and mostly entertaining, the concept is just too much fun to not give it a go!

My Rating: B+
Narration: C

Life couldn’t be better…until Andrew begins to pick up on the fact that (1) every Away Mission involves some kind of lethal confrontation with alien forces, (2) the ship’s captain, its chief science officer, and the handsome Lieutenant Kerensky always survive these confrontations, and (3) at least one low-ranked crew member is, sadly, always killed.

Not surprisingly, a great deal of energy below decks is expendedon avoiding, at all costs, being assigned to an Away Mission. Then Andrew stumbles on information that completely transforms his and his colleagues’ understanding of what the starship Intrepid really is…and offers them a crazy, high-risk chance to save their own lives.