Audiobook Review: Shooting for the Stars 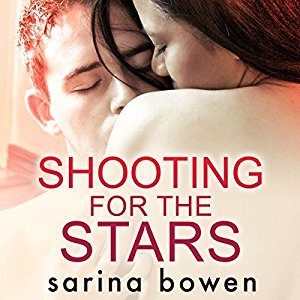 Stella Lazarus has loved her big brother’s best friend ever since she can remember. Stella tried to show Bear how she felt years ago, but he brushed her off. So she has to be satisfied with just being good friends. Bear thinks Stella is the sexiest woman alive, but she’s his best friend’s little sister, which means she’s off limits, and it has taken every ounce of will power to keep her at arms length. But when the pair find themselves alone in an upscale hotel room after a few drinks and good food, neither Stella nor Bear can say no to the years of denied attraction. Stella and Bear share an amazing, fantasy-fulfilling night together, but it all comes to a quick end when Bear freaks out about breaking the bro-code and not being good enough for Stella, coupled with Stella’s brother’s career-ending accident.

Shooting for the Stars opens just before the start of the second Gravity book, Falling From the Sky and Hank’s horrific accident. The book then jumps ten months, keeping it on pace with the timing of Falling from the Sky. Although there is a lot of overlap in the timing of books #2 and #3, the story is completely different, with Hank playing a minor roll in this title.

Stella and Bear are best friends who are perfect for one another, but something always prevents it from happening. Mostly it’s on Bear – he’s afraid to open up and face his feelings head on. When they are together – whether as friends, potential lovers, or awkward and unsure companions – they capture my attention. Both carry around so much baggage and pain, love and hope; their interactions are emotionally fulfilling. However, much of the first half of the book is spent in lengthy flashbacks, and the dynamic of the budding romance stumbles during these interludes. I appreciate knowing more of their history, but at the same time, the author established their deep connection early (starting some in the second book), so jumping to the past pulled me out of the present. Additionally, during much of the middle of the book, the pair avoids each another.

But then, Bear starts making his movie and the couple are forced to spend time together. Unlike most romances where we see characters working to come together, Bear and Stella spend time trying to stay apart. So, the story must rely on inner monologues to help readers understand that the feelings are still ever present, even if they both are trying hard to forget them. I really enjoyed listening as both Bear and Stella mature and come to terms with their feelings and needs. Toss in a close brush with death, and everything gets laid out on the table. And Hank’s reaction to his best friend and sister being together is priceless.

Shooting for the Stars brings listeners the third set of narrators for the Gravity series. While I can appreciate having different narrators because each book has a different set of main characters, it is also a bit discombobulating having different voices for characters I’ve known for two or three books. Right from the start I feel Ms. Wilder has a strong performance. With an almost breathless quality, she captures Stella’s desire and hopes. As the book goes on, I feel the female narrator does an excellent job of growing with her character. On the other hand, I had trouble with Mr. Harrison as soon as I heard him. At my usual 1.25x speed, his performance is riddled with dramatic pauses and unnecessary rests. It reminded me of the young Captain Kirk. Well, not that bad, but it’s start, stop, pause, start, stop, pause. I sped the playback up to 1.5x, and that helped, and overtime, I was able to get past the cadence issues. I did like the quality of his voice, which was deep and sexy, but the start/stop nature ruined much of that for me.

Overall, I liked Shooting for the Stars and getting Bear and Stella’s story. The early middle was a little slow, with a lot of flashbacks, followed by so much avoidance, that the story dragged at times. However, it all feels very genuine. The fear of losing a friend, the guilt, the longing, etc., and in the end, I liked how it all played out.

Pro snowboarder Stella Lazarus has always loved her brother’s best friend. But the one time she tried to show him, she was shot down faster than you can say “competitor disqualified.”

Until one blissful night in Tahoe, when Stella finally gets her man.

Or does she? In the morning, Stella and Bear wake up to horrible news. The sort that sends them racing back to Vermont, and straight into the arms of guilt and family obligations.

For all of Bryan “Bear” Barry’s life, three natural laws held true: his best friend Hank was destined for greatness, Hank’s sister Stella was off-limits, and Bear would always manage to negotiate the rocky paths that life threw his way. In the space of two days, that’s all shattered.

Bear can’t believe he slipped up so badly with Stella. Even if his best friend wasn’t lying broken in a hospital bed, it would still be unforgivable. Determined to do better, he devotes himself to his friend’s recovery, denying himself the very person he loves. And the very thing he needs.