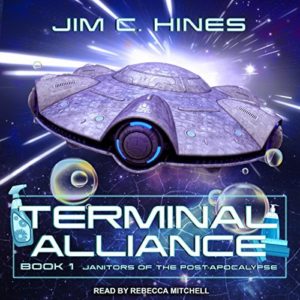 When a mysterious contagion turns most of the crew of the EMC Ship Pufferfish into feral zombies and kills the rest, Marion “Mops” Adamopoulos is left in charge of the few survivors. As a lowly human, she doesn’t have much access to the ship, but when Mops realizes that Krakau command intends to euthanize the human crew rather than try to save them, she commandeers the ship with the help of her minimal crew. Soon Mops uncovers a danger so big, it threatens the entire Krakau alliance, and she is faced with the decision to surrender or discover the truth.

Terminal Alliance is an entertaining space adventure with a spunky heroine who uses her brain and instinct when down and out. While there is much going on, the book focuses on Mops and her adventure. She is a great character: one of those underdogs who is destined for more. The David to the EMC’s Goliath. I love how Mops thinks things through and how loyal she is to her crew. She was born to be a great leader and through this series of unfortunate events, she’s coming into her own. I enjoyed sitting back and listening to Mops figure it all out, never second guessing her analysis.

The side characters are equally fun and interesting. They each play their part and through Mops’s leadership, form a team and family. And though working as a team under stressful situations, each character grows and matures. Additionally, the story is filled with silly humor and fun pop culture references. I love the historic human names used like Sherlock Holmes, Marilyn Monroe, Carrie Fisher.

The plot of Terminal Alliance itself is engaging. The story evolves as Mops and her crew learn bits and parts behind the bioweapon attack that put her in charge of the Pufferfish. There are many layers that need to be pulled back before Mops and the crew uncover the truth; the final goal and plot. This gradual reveal, complete with twists and turns, kept my interest and pulled me in throughout the entire story.

Overall, the performance by Ms. Mitchell is solid and entertaining. She gives just enough variation between the different characters that I was able to know who was speaking just by voice. While the primary narrative voice felt a bit “robotic,” it suited the main character, Mops, as she tried to get through these events. Additionally, the narrator gives each character it’s own suitable flair – the “mechanical” feel of the Grom, no-nonsense from Monroe, calm wonder from Kumar, and guns-blazing Wolff. And although I didn’t find a solid link, the narrator must be Rebecca Estrella from the Princess of Hell series by Eve Langlais.

In the end, I enjoyed this story… trying to uncover each piece, seeing how Mops reacts in so many different situations. To watch the small crew realize they have the potential to be more, and their joy in achieving it. It will be fun to follow the group as they gain momentum and additional support to discover the truth.

When the Krakau came to Earth, they planned to invite humanity into a growing alliance of sentient species.

This would have worked out better for all involved if they hadn’t arrived after a mutated plague wiped out half the planet, turned the rest into shambling, near-unstoppable animals, and basically destroyed human civilization. You know—your standard apocalypse.

The Krakau’s first impulse was to turn their ships around and go home. After all, it’s hard to establish diplomatic relations with mindless savages who eat your diplomats.

Their second impulse was to try to fix us.

A century later, human beings might not be what they once were, but at least they’re no longer trying to eat everyone. Mostly.

Marion “Mops” Adamopoulos is surprisingly bright (for a human). As a Lieutenant on the Earth Mercenary Corps Ship Pufferfish, she’s in charge of the Shipboard Hygiene and Sanitation team. When a bioweapon attack by an alien race wipes out the Krakau command crew and reverts the rest of the humans to their feral state, only Mops and her team are left with their minds intact.

Escaping the attacking aliens—not to mention her shambling crewmates—is only the beginning. Sure, Mops and her assortment of space janitors and plumbers can clean the ship, but flying the damn thing is another matter. As they struggle to keep the Pufferfish functioning and find a cure for their crew, they stumble onto a conspiracy that could threaten the entire alliance.