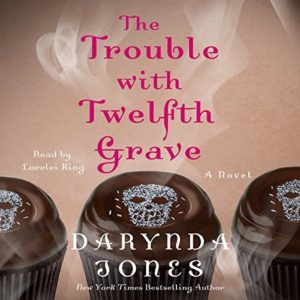 Note: this review contains spoilers from earlier books in the series, to include the surprising ending of the previous book.

Opening three days after the explosive conclusion of Eleventh Grave in Moonlight, Charley is searching for her husband-turned-malevolent-god, Rey’azikeen. No longer Reyes after his short jaunt into the god glass hell dimension, Rey’azikeen is loose and Charley has been given one more day to find and stop him before Jehovah sends his army to capture him.

The Trouble with Twelfth Grave is a wonderful addition to this crazy, hilarious series. Overall, the story is shorter and far more direct than previous titles (well, as direct as Charley Davidson can be). Each strand of the plot is clear and makes sense, and then Ms. Jones expertly draws them all together to create a larger picture as the book progresses. Charley uses her wit and cunning, along with her team of friends, to solve multiple cases that seem unrelated, but ultimately tie in loose ends or come together by the end of the book.

I love how free Charley is in this book – she’s back. The whole “do I trust Reyes or not” issue seems to FINALLY be put to rest as Charley struggles with the very real possibility she may lose the love of her life forever this time. She goes from moment to moment, bringing readers and listeners along for one crazy ride. The convoluted subplots are absent, leaving behind a solid story with a bring big twist at the end. Additionally, the continuity issues I’ve noted in the past are either gone, or irrelevant because the rest of the story runs so smoothly. Finally, while the author does do some info dumping, it’s in the form of children’s books, and scattered throughout the story, rather than at the very end.

Lorelei King, my all-time favorite narrator, continues to capture Charley’s unique and crazy personality, easily jumping from one subject to the next without pause. She has mastered Charley’s sarcasm and sincerity, her passion and her fury. I think the only reason I can keep up with Charley’s ADD lifestyle is due to Ms. King’s masterful performance. And it’s not just Charley, but Ms. King provides a large range of unique voices for every character, making the recording sound like a cast of dozens, rather than one.

In the end, I really enjoyed listening to The Trouble with Twelfth Grave, and with the way the story ended, I cannot wait to find out how Ms. Jones is going to wrap up the series with her thirteenth title.

My Rating: B+
Narration: A+

Ever since Reyes Farrow escaped from a hell dimension in which Charley Davidson accidentally trapped him, the son of Satan has been brimstone-bent on destroying the world his heavenly Brother created. His volatile tendencies have put Charley in a bit of a pickle. But that’s not the only briny vegetable on her plate. While trying to domesticate the feral being that used to be her husband, she also has to deal with her everyday life of annoying all manner of beings–some corporeal, some not so much–as she struggles to right the wrongs of society. Only this time she’s not uncovering a murder. This time she’s covering one up.

Add to that her new occupation of keeping a startup PI venture–the indomitable mystery-solving team of Amber Kowalski and Quentin Rutherford–out of trouble and dealing with the Vatican’s inquiries into her beloved daughter, and Charley is on the brink of throwing in the towel and becoming a professional shopper. Or possibly a live mannequin. But when someone starts attacking humans who are sensitive to the supernatural world, Charley knows it’s time to let loose her razor sharp claws. Then again, her number one suspect is the dark entity she’s loved for centuries. So the question becomes: Can she tame the unruly beast before it destroys everything she’s worked so hard to protect?