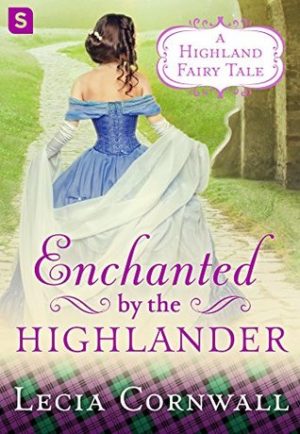 I absolutely love Ms. Cornwall’s Highland Fairy Tale series.  This latest installment, Enchanted by the Highlander, is another delightfully romantic and compelling tale.

In this story, we have a retelling of Cinderella.  But like the other stories in this series, it is a fresh retelling with twists and turns that make it wholly its own fairytale.  Gillian (Gilly) has always gone along with what her sisters and father have wanted, so much so, most of the time they even speak for her.  Gilly may be shy, but she is not unintelligent.  She is actually quite observant, intelligent, and possesses the MacLeod stubborn determination. But she prefers not to make waves, so she bobs along by the directions of her family.  However, in trying to do the right thing, the family decides to marry her off to a far older man.  Sir Douglas would provide a quiet, safe, and low-key home for Gilly while she could be more of an assistant to his writings.  Unfortunately, Gilly had already lost her heart to someone she knows her family would reject.

We previously met our hero, English John, in the first novel in this series, Beauty and the Highland Beast.  He was Dair’s captain of the guard and protected Fia and her sister Meggie when the village were about to burn them at the stake (if you haven’t read it yet, do so – it’s great story).  John meets Gilly about a year before she is engaged to Sir Douglas.  She had been returning from Edinburgh after unsuccessfully finding a suitor.  Upon one glance between them, the line was cast and caught.  The problem, besides that John is an Englishman, is that he is disowned by his father.  John’s tale is full of grief and heartache.  He has no plans of marriage as he feels he could not condemn a woman to life bound with a disowned, poor man.

The fates of these two are sealed when Gilly, stepping out of her comfort zone, dresses up in a different costume than the one her sister Fia had picked out.  John, stunned by the beautiful and intelligent woman, shares a kiss – the kiss that changes everything.  John does not know the identity of the masked woman, but after that kiss, he desires no other.

Fast forward ten months, and we find Gilly preparing for her wedding. However, things do not go as planned.  Through the course of this adventure to her wedding, John, as her escort (and the one to give her away), accompanied by a group of Sinclairs are attacked.  Gilly finds her voice and begins to show everyone that she is no wilting flower.  I love how empowered she becomes and yet retains her shyness and gentleness.  It shows that a woman can have a voice without being forced to change her personality or be something she isn’t.  We learn so much about both John and Gilly, it seems the fates were right in pairing these two.

I loved this novel.  I love this world.  I love this series.  These highland fairy tales are beautifully woven with elements from beloved fairy tales, historic Scotland, and characters with depth.  They become fresh and new, and utterly engrossing.  If this sounds like something you would enjoy, definitely start with the first book, Beauty and the Highland Beast.

Gillian MacLeod is shy and quiet, the least likely of all her sisters to seek out excitement and adventure. But on a moonlit night at a masquerade ball, Gillian steals a kiss from a mysterious stranger, knowing she’ll never see him again.

John Erly, disowned by his noble English father, started a new life in Scotland. Most people are suspicious of the foreign mercenary and he does everything is his power to avoid romantic entanglements. But he can’t forget the bewitching beauty who kissed him in the dark, and stole his heart, even though he has no idea who she might be.

A year later, John is given the duty of escorting Gillian to her wedding and immediately recognizes her as the temptress he’s dreamed of for months. There’s not much he can do when she’s promised to another man, but fate intervenes and this time, passion—and adventure—can’t be denied. Honor demands he stay away from the MacLeod’s enchanting daughter, but love has a very different ending in mind…