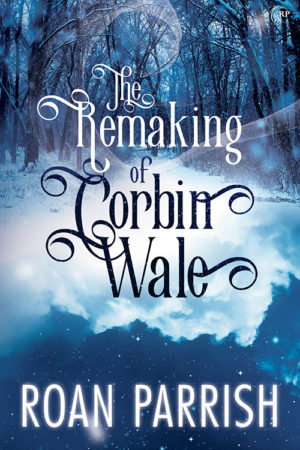 The Remaking of Corbin Wale
Author: Roan Parrish
Reviewer: B.
Rating: B+

Although I’ve read several titles by this author, and have enjoyed each one a great deal, I had a difficult time with both the reading of The Remaking of Corbin Wale, as well as writing this review. Evocative, sensual, and magical—I can’t remember ever reading anything like it, and wanted to love it because of that alone. Each of the five senses is teased into complicity, and the author’s general storytelling abilities are evident throughout. Phrasing such as:

“In Alex’s arms, time was measured in breaths and distance in the wrinkles of the clothing between them…”

handily caught me up in the narrative are everywhere, seeming almost careless in their delivery, if it weren’t for their undeniable importance.

I also thought both Corbin and Alex were wonderful characters, although it was Corbin who repeatedly drew me in and kept the story pleasantly unsteady. Corbin has made a wall of himself, reinforced by a lifetime of inherited hurt and loneliness, and I couldn’t help being fascinated by the increasing fractures along its surface shaped by his wanting of Alex. The two are different in so many ways, but somehow collide at the merging of belief and magic, sensation and desire—the jumble of their pieces sliding together in a cohesiveness that neither is much inclined to refute.

Almost a character in and of itself, the Wale curse is an ever-present nemesis, always lurking and threatening, and shaping so much of Corbin’s life that it really does seem to be a tangible thing. At first, I thought the curse begged the familiar question: does it exert a power of its own on those subject to it, or does it derive influence from the strength of their belief in its existence? In Corbin’s case, however, that became irrelevant as soon as Alex joined him in his determination to break it, rather than doubt its actuality.

Overall, I found The Remaking of Corbin Wale to be a unique and sweet holiday read. While there were several moments when I was unable to completely immerse myself in the narrative, I’ve decided they are more personal in nature and shouldn’t dissuade anyone else from giving it a try. Additionally, 20% of the proceeds from the sale of this title will be donated to the Russian LGBT Network, which, on initial inspection, seems like a very worthy cause.

Last month, Alex Barrow’s whole life imploded—partner, home, job, all gone in forty-eight hours. But sometimes when everything falls apart, better things appear almost like magic. Now, he’s back in his Michigan hometown, finally opening the bakery he’s always dreamed of. But the pleasure of opening day is nothing compared to the lonely and beautiful man who bewitches Alex before he even orders.

Corbin Wale is a weirdo. At least, that’s what he’s heard his whole life. He knows he’s often in a fantasy world, but the things he feels are very real. And so is the reason why he can never, ever be with Alex Barrow. Even if Alex is everything he’s always fantasized about. Even if maybe, just maybe, Corbin is Alex’s fantasy too.

When Corbin begins working at the bakery, he and Alex can’t deny their connection any longer. As the holiday season works its magic, Alex yearns for the man who seems out of reach. But to be with Alex, Corbin will have to challenge every truth he’s ever known. If his holiday risk pays off, two men from different worlds will get the love they’ve always longed for.

About the 2017 Holiday Charity Collection 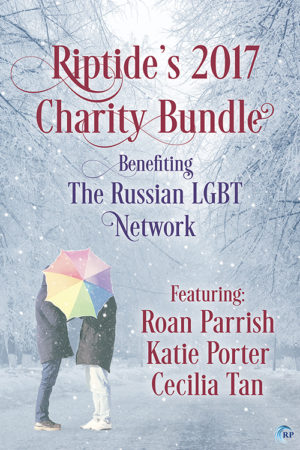 20% of all proceeds from this title will be donated to the Russian LGBT Network.

Each year, Riptide Publishing releases a holiday collection in support of an LGBTQ charity. Twenty percent of the proceeds from this year’s collection will be donated to the Russian LGBT Network.

The Russian LGBT network was founded in April 2006. It is an interregional, non-governmental human rights organization that promotes equal rights and respect for human dignity, regardless of sexual orientation and gender identity. They unite and develop regional initiatives, advocacy groups (at both national and international levels), and provide social and legal services.

To learn more about this charity or to donate directly, please visit their website: https://lgbtnet.org/en.

Buy all three in the collection and save!

Roan Parrish lives in Philadelphia where she is gradually attempting to write love stories in every genre.

When not writing, she can usually be found cutting her friends’ hair, meandering through whatever city she’s in while listening to torch songs and melodic death metal, or cooking overly elaborate meals. She loves bonfires, winter beaches, minor chord harmonies, and self-tattooing. One time she may or may not have baked a six-layer chocolate cake and then thrown it out the window in a fit of pique.

She is represented by Courtney Miller-Callihan of Handspun Literary Agency.

To celebrate the release of The Remaking of Corbin Wale, one lucky winner will receive a $20 Amazon gift card! Leave a comment with your contact info to enter the contest. Entries close at midnight, Eastern time, on December 2, 2017. Contest is NOT restricted to U.S. entries. Thanks for following the tour, and don’t forget to leave your contact info!