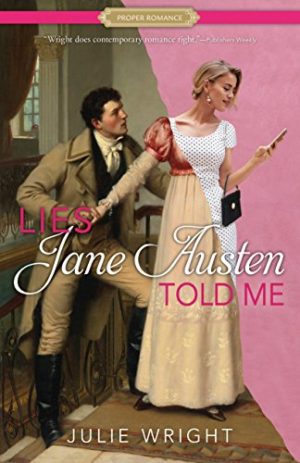 *stands up with a little wave*  Hello, my name is Nima and I am a Hallmark romance movie addict.  I did a little jig and set my DVR when Hallmark announced thirty-three new Christmas movies for the 2017 season.  Clearly, I am not alone.  What does that have to do with a book review?

I’ve always contended that romance readers love relationships and Hallmark has proved that modern consumers are not put off by a lack of steamy sex scenes.  Shadow Mountain Publishing has a series of stand alone “proper romances” which banks on this niche group’s desire, which I surmise isn’t so niche, to soak up the actual romance and all the emotion that can be extracted from a glance and holding hands. We enjoy the butterflies. Up until now Shadow Mountain’s stand-alone romances have been historical, some even based on actual couples like Henry Longfellow and Fanny Appleton (Forever and Forever by Josi S. Kilpack.)

Lies Jane Austen Told Me* by Julie Wright is their first foray into contemporary romance.  It reminds me in many ways of my guilty pleasure Hallmark movies as it follows Emma Pierce, who has grown up using Jane Austen’s classics as an outline for falling in love, while she waits for the wealthy and handsome Blake Hampton to propose.  Thankfully, Wright does not try to do what other authors have done by mimicking Austen’s storylines. Instead Austen is revered, but this is Wright’s original work.

Wright was smart in making her love interests into work colleagues.  That’s a relationship which requires distinct boundaries, but lots of time in each other’s company.  It also keeps it from feeling intentionally prudish.

He’d come impossibly closer, yet the only contact between us was my hands on his chest and his hands on mine.  How had he done that?  How had he crossed so much distance and still made no contact anywhere else?

Not to put too fine a point on it, but the lack of sexual gratification equals enhanced tension that’s delicious.  It means there is a greater focus on the actual relationship—how they communicate and interact.  Without the need for “insta-love” to justify jumping in to bed, the depth of the relationship has the time to develop in a way that’s normal in the real world.

When Blake does not propose, Emma is introduced to Blake’s brother Lucas in the awkward moment that follows when you just want to crawl under a rock.  The result: a messy love triangle.

Even though Emma, Lucas, and Blake are all old enough to be working adults who have achieved in their careers, it is appropriate for teens to read as well.  There are a couple character quirks, especially about Blake, that annoyed me, but not enough to slow the flow of the read for me.

My single criticism is a minor one.  Like Austen, Wright makes some genuinely clever and insightful observations—except—she liked them so much she repeats several of them almost verbatim a few paragraphs down or elsewhere in the book.  Those instances weren’t entirely grievous, but they did interrupt the flow of the story for me. I think the only thing that would have made me like it more is if we could have had two perspectives, flipping between Emma and Lucas, instead of Emma’s single point of view.

The cover is really beautifully done.

*Note:  Do not confuse Wright’s work with the 2015 book by the same title authored by Julie L. Rowse.

Ever since Emma read Pride and Prejudice, she’s been in love with Mr. Darcy and has regarded Jane Austen as the expert on all things romantic. So naturally when Emma falls for Blake Hampton and he invites her home to meet his parents, she is positive an engagement is in her future. After all, Blake is a single man in possession of a good fortune, and thus must be in want of a wife.

But when it turns out that what Blake actually wants is more of a hook-up than a honeymoon, Emma is hurt, betrayed, and furious. She throws herself deeper into her work as CMO of Kinetics, the fastest growing gym franchise in the nation. She loves her work, and she’s good at it, which is why she bristles when her boss brings in a consultant to help her spearhead the new facilities on the East Coast. Her frustration turns to shock when that consultant turns out to be Blake’s younger brother, Lucas.

Emma is determined not to fall for Lucas, but as she gets to know him, she realizes that Lucas is nothing like his brother. He is kind and attentive and spends his time and money caring for the less fortunate.

What she can’t understand is why Lucas continues to try to push her back into Blake’s arms when he so clearly has fallen as hard for her as she has fallen for him.