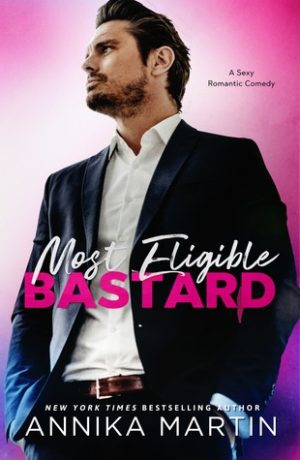 Vicky works hard to provide for her sister and keep their modest life running smoothly, even when it means pretending to be a dog whisperer for the unpleasant and lonely Bernadette Locke. However, when Bernadette passes away leaving her fortune to her dog Smuckers, and Vicky as his regent, Bernadette’s son Henry accuses Vicky of being a con artist. Although Vicky never asked for any of it, she’s not going to let this sexy, rich man push her around. Let the games begin…

Although billed as a romantic comedy, Most Eligible Bastard isn’t light and fluffy. Ms. Martin has a dark, wicked sense of humor that I love, but it may not be for everyone. The humor in the book is off beat, silly, sarcastic, and naughty. I love it! And considering Vicky’s past-the issues she’s had to overcome, there is dark in this story as well.

While primarily a romance, there is much more going on in the story. I enjoy how the author gives bits and pieces of what happened to Vicky as a teen. Putting together the parts one at a time adds a bit of heightened tension to the read. I know something awful happened, and that history is somehow repeating itself, but without knowing the whole picture, it put me on edge. And honestly, the opening third of the book took me outside my comfort zone. I struggle with stories where a person telling the truth is railroaded into looking like they lied. When the victim becomes the bad guy. The injustice hurts something deep inside me. And this story has it two-fold. First in the back flashes and memories, but also in present day as things are repeating themselves.

However, I realized that somewhere along the way, the maddening panic I felt because of the injustice went away because Henry started believing in Vicky. The story was no longer about her fighting for innocence, rather it becomes about Vicky and Henry getting to know each other and finding happiness with one another.

Vicky and Henry make the perfect, unlikely couple: kind of like Richard Gere and Julia Roberts in Pretty Woman. Henry and Vicky are different sides of the same coin. Henry doesn’t recognize that he has a gapping hole in his life, while Vicky knows exactly what’s missing from her life. I enjoy how the pair grow and evolve, watching Henry find the piece of himself that was missing all along, and for Vicky to rediscover the parts she’d buried. They both heal from deep wounds and find solace and beauty in their friendship and love affair. But their relationship is more than just plugging up holes; they develop genuine friendship and trust based on mutual interest and intense sexual attraction.

The story is shared in alternating first person, present tense points of view. At times it is fast and crazy, just like their relationship, which allows me to get all swooped up in the moment. And although there are bumps and dark places, in the end, Most Eligible Bastard is a feel good, happy story. There are some laugh-out-loud and crazed moments,  but it’s not rom com. It’s not chick lit. It’s moody and stormy. It’s crazy and wild. And I enjoyed it very much!

He’s a powerful billionaire CEO who built the family business into an empire. The money doesn’t matter to him, but the company is his life. And then his eccentric mother wills it all to her tiny dog.

I’m Vicky, the dog whisperer. (Not really, but that’s what my elderly neighbor always says.) When she dies, she surprises everybody by leaving a corporation worth billions to her dog, Smuckers. With me as his spokesperson.

Suddenly I go from running my Etsy store to sitting in an elegant Wall Street boardroom with Smuckers in my lap. And my neighbor’s son, Henry Locke, aka New York’s most eligible bachelor, glaring across the table at me.

Rumor has it Henry’s a business genius who’s as talented in the bedroom as he is in the boardroom. Sure, he’s gorgeous. Sex-in-a-seven-thousand dollar suit. But…

He refuses to listen to me when I insist I didn’t con his mother.

He thinks he can bully me, buy me off, control me, even seduce me.

Henry may have the women of Manhattan eating out of the palm of his hand, but I’m so over entitled rich guys who think they own the world.

No way will his wicked smile be charming ME out of my panties.