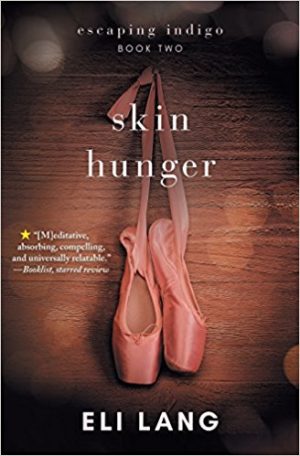 I liked Ava a lot in the first novel in the series, Escaping Indigo, so I was eager to find out more about her in Skin Hunger. At twenty-eight, Ava’s finally shaped her life into something she truly loves—for the most part. She’s the drummer in a successful band with her best friend and owns a house she’s proud of in a city she enjoys. It would be perfect if only she weren’t in love with said best friend (and completely unavailable bandmate), Tuck.

The beginning of Skin Hunger held a great deal of promise overall, and I stopped to reread one or two specific passages on the spot so I could hold on to them as the story progressed. There were several moments that were simple and pretty, and which suggested a stronger foundation for the narrative as a whole.

These were, by far, some of my favorite scenes in Skin Hunger, and I’d have liked to have seen more of this kind of awareness from Ava throughout.

There were also several secondary characters in Skin Hunger that I enjoyed a great deal, Ava’s grandmother and cousin Zevi, in particular. Though we don’t see nearly enough of him, Zevi is warm, supportive, and strong, and I couldn’t help but be intrigued by him, even with what little we’re shown. Ava’s grandmother is just as memorable, with her guarded resilience, and it was a pleasure to witness her tentative invitation to Ava to be a part of her world.

One problem I kept having while reading Skin Hunger, however, was that the single-person narration placed high expectations on Ava’s handling of her own internal conflicts. Rather than following a solid trajectory to its conclusion, they seemed centripetal, circling without a definitive attempt on Ava’s part at any sort of resolution until the very end. That’s not to diminish the importance of what Ava is going through—as Cara says, two peoples’ experiences “can’t be measured against each other. They just can’t.” But, I still couldn’t help but feel that Ava’s POV might have benefitted from the inclusion of another perspective.

Another issue I had was that, even though we’re never able to see through Cara’s eyes, I thought she was the more relatable of the two main characters. Without giving the appearance of implausible perfection, Cara stole the narrative for me, and I looked forward to every scene she was in. She bears the scars from unseen battles gracefully, and, with her gentle hope, patience, and steadiness, Cara simply felt like the stronger character.

Despite these factors, Skin Hunger regains some of its strength by the end. While I wouldn’t have been surprised if Cara sent Ava away with nothing, they agree to a “let’s try/we’ll see…” which I thought was a perfectly fine ending, in this case. The author made a separate epilogue available after Escaping Indigo, and I’m keeping my fingers crossed for something similar here. Regardless, I’m still hopeful for this series and the band members themselves, and will be looking forward to the completion of their journey in the next book.

Ava should be living her dream as the drummer for Escaping Indigo. The problem is, she’s secretly in love with her bandmate, Tuck. But he’s fallen for someone else. Being a drummer is still the best, but for Ava, every day is also a reminder of what she can’t have.

With her grandmother moving into assisted living, Ava figures it’s a good time to head home and help out. And if it lets her get some distance from Tuck and his girlfriend, all the better. But Ava hasn’t visited her family in years, and home isn’t really home anymore. Instead, it’s the place she’s been running from, full of memories of everything her parents wanted for her—and everything she didn’t want for herself.

But on the airplane, Ava meets Cara, and the two women feel an immediate connection. And when they bump into each other a second time, it seems like fate. Cara offers Ava something she’s never had—someone to love who loves her back. But to be with Cara, Ava may have to change her whole life around, and that’s something she’s not sure she’s ready for.