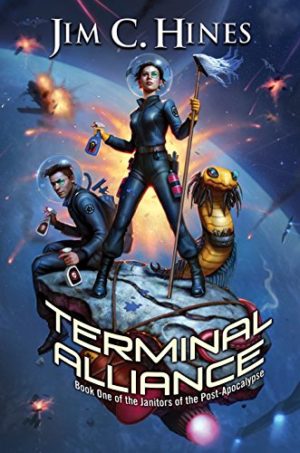 Terminal Alliance is a new hilariously witty science-fiction novel by Jim C. Hines.  We loved it!

Mr. Hines has blended his characteristic humor, world building, and character development in a science fiction world.  The human race is actually endangered.  Humans destroyed themselves, but are being slowly saved from a devastating virus by an alien race, the Krakau.  The virus takes a thinking, reasoning, rational human being and turns them feral.  Humans have become id driven animals, reacting by instinct and fueled only by baser needs.  However, once rehabilitated by the Krakau into calm beings, humans are physically stronger than they once were and are almost invincible.  Most rehabilitated humans work in military professions for the Krakau.

This novel focuses on Mops, the head janitor on the EMC spaceship Pufferfish.  During an operation to save another vessel from a Krakau enemy, the entire human crew, except Mops and her small team, revert to a feral state.  In the panic that ensues, all alien crewmembers, except Grom, are killed.  Command falls to Mops as the most senior member of the crew.  She must find a way to help her feral compatriots and uncover the cause of this mysterious virus.

Yes, there is some bathroom humor, but it is tasteful and hilarious.  However, it is the perceptions of the aliens, the interactions between them and humans, as well as the “lost” cultural references that Mops and crew throw around that make this novel wonderful.  We loved how intricate the different alien races were, especially their cultures.  For example, Grom is an alien that is neither male nor female.  So the pronouns used in reference to all members of this species are always “they”.  However, there is another alien race that can change its gender, thus, when referring to them, you must change the gender of the pronoun every other sentence.  It isn’t as confusing as you think, but cleverly funny!

The characters that create the core of Mops’ team are varied and wonderful.  Their names, their interactions, and the way their life is structured, are all fascinating, funny, and cleverly woven into the mythology.  One of our favorite characters is Puffy, the onboard ship’s computer assistant.  Puffy is the go to guy when you need to know how to steer the ship, use the tractor beam, or simple things like making a call.  It seems to us that Mr. Hines had to have had a lot of fun writing this novel.

Although it starts a little slowly, it truly picks up about halfway.  Terminal Alliance was difficult to put down and we are anxious for the next book in this trilogy.  If you enjoy a few laughs, some intelligent witty bathroom humor, and a mysterious adventure, seriously pick up this first book in the Janitors of the Post-Apocalypse series.

In his hilarious new sci-fi series, Jim C. Hines introduces the unlikely heroes that may just save the galaxy: a crew of space janitors.

The Krakau came to Earth to invite humanity into a growing alliance of sentient species. However, they happened to arrive after a mutated plague wiped out half the planet, turned the rest into shambling, near-unstoppable animals, and basically destroyed human civilization. You know–your standard apocalypse.

The Krakau’s first impulse was to turn around and go home. (After all, it’s hard to have diplomatic relations with mindless savages who eat your diplomats.) Their second impulse was to try to fix us. Now, a century later, human beings might not be what they once were, but at least they’re no longer trying to eat everyone. Mostly.

Marion “Mops” Adamopoulos is surprisingly bright (for a human). As a Lieutenant on the Earth Mercenary Corps Ship Pufferfish, she’s in charge of the Shipboard Hygiene and Sanitation team. When a bioweapon attack wipes out the Krakau command crew and reverts the rest of the humans to their feral state, only Mops and her team are left with their minds intact.

Escaping the attacking aliens–not to mention her shambling crewmates–is only the beginning. Sure, Mops and her team of space janitors and plumbers can clean the ship as well as anyone, but flying the damn thing is another matter.

As they struggle to keep the Pufferfish functioning and find a cure for their crew, they stumble onto a conspiracy that could threaten the entire alliance… a conspiracy born from the truth of what happened on Earth all those years ago.