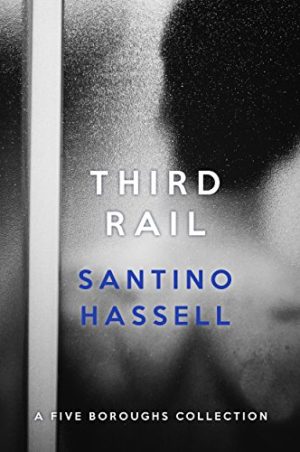 Beginning just after Interborough, and supplementing the numerous hints scattered throughout Concourse, this quick, sexy collection of shorts is the perfect precursor to the sixth book in the Five Boroughs series, Citywide. Having been charmed by Chris way back in Sunset Park, and left scrambling for whatever details I could glean about both Aiden and Jace after being officially introduced to them in First and First, I’m absolutely thrilled to be able to experience this part of their journey through Third Rail.

These three have always been favorites of mine, and I couldn’t have been happier when it was hinted that they’d have their own HEA. Sweet and a little bit shy, Chris has always revealed a significant amount of insecurity in himself that felt unfinished on the perimeter of others’ stories. In contrast, Aiden and Jace’s narrative might have been self-contained, if not for the realization that they, too, have more to experience in the wake of a sexual intersection with Chris. And although I’ve fallen for quite a few of the characters throughout this series, I want these guys to find their way very, very much.

Easily read on one sitting, Third Rail requires little investment for the insightfulness its bound to contribute to the series overall. And while it might be fun on its own, it really does belong within the context in which it was intended. Each of the Five Boroughs stories has affected me in different ways, and I’m proud to have them on my physical bookshelf, as well as in other formats. This delightful offering from the author is a much-appreciated gift that shouldn’t be ignored.

Christopher Mendez has always known his sexual identity had a swerve. No straight guy would have low-key lusted after his childhood best friend, right? Unfortunately, a combination of insecurity and overall lack of game has prevented him from further exploring his sexuality. That changes once he agrees to participate in a photoshoot for a queer dating app and meets Jace Fairbairn.

Jace is beautiful, fey-like, and in an open polyamorous relationship with his gorgeous linebacker-looking husband Aiden. Once they set eyes on Chris, they’re instantly in lust and determined to broaden his sexual horizons. But what’s supposed to be a straight-forward sexual encounter gets complicated once a one-night-stand has repeat performances, and Jace and Aiden begin to fall in love.

This collection of shorts explores the start of a relationship that eventually blossoms into something the three men realize they cannot do without.