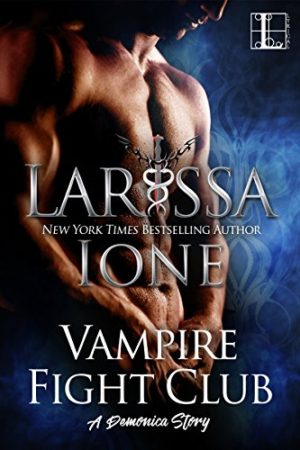 Nathan (Nate) Sabine, a rare, daywalker vampire, has worked at an underground fight club for decades hoping to bring it down from the inside, ever since the owner, Fade, killed his wife. But Nate has become apathetic and has lost sight of his need for revenge. He hates himself.

Vladlena (Lena) Paskelkov is a nurse at UGH. She’s working when one of the paramedics brings in her brother all torn up. They discover he was killed at an underground fight club. Lena decides to go undercover as a medic for the fight club’s legitimate front, the Vampire nightclub Thirst, to seek revenge for her brother’s murder.

Although previously released, Vampire Fight Club is one of the few (only?) Demonic stories I hadn’t read. I absolutely enjoyed diving into the old school Demonica tales. The story is set mid-series, after the original crew have their stories, but before most of the Lords of Deliverance characters are mated. It’s fast, simple, and fun. Nate and Lena share an instant attraction, although it sort of horrifies Lena as she’s not certain if Nate had anything to do with her brother’s death. But their pull is undeniable, and it gives Nate a reason to live again. It also helps Lena fulfill her own shifter needs.

Vampire Fight Club is independent of the original series and can be enjoyed as a standalone or introduction to this awesome PNR series. As for fans of Underground General Hospital, this story is an entertaining, sexy addition to the Demonica series.

When a wave of violence that hits too close to home forces shapeshifter and underworld nurse Vladlena Paskelkov to go undercover, her first stop is a haven of vice—with a dangerously sexy vamp in charge…

Legendary, jaded, Nathan Sabine is the manager of Thirst, a wildly popular vampire club—and secret underground blood arena. But Nathan, a rare daywalker, possesses other, even more explosive secrets, as does his beautiful new medic, Vladlena. The one thing they can’t conceal is the lust that simmers between them…

Now, in an underworld divided by revelry and violence, debauchery and vengeance, Nate and Lena will discover which risks are worth taking—and which desires demand surrender…