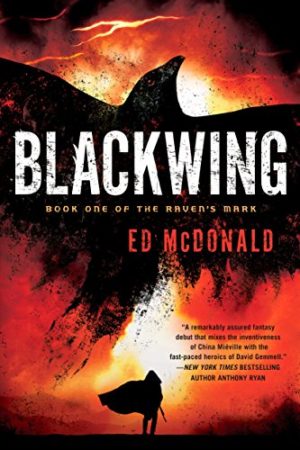 “Got separated,” Nenn said.  She was breathing hard, face red with exertion and slick with sweat.  “I ran up the stairs.  think they fell back into a pantry.”

“Could be a thousand out there for all I saw.”

I wiped drudge blood from my hands, ran my tongue over my teeth.  Shook my head.

“That many couldn’t have snuck this close.  My guess is more than fifty, less than a hundred.  We haven’t lost yet.  Come on.”

The garrison was scattered through the halls, half drunk, half green, terrified and lacking orders.  Most of them had probably never seen the drudge up close before.  They weren’t pretty.

“We need to go down.  Join up with the garrison,” I said without enthusiasm.  I don’t like fighting if I’m not getting paid, but we were all in the s*** if Twelve went down.  Nenn shook her head firmly, grabbed a heavy stairway door and pulled it closed, barring it with a dust-covered beam.  All castle stairwells can be shut off like that if the builders are smart.  This one had been.

“Not that way. There’s ten or more down in the kitchen.  Or there was.  What the f*** are they doing here?”

“Trying to take control of Nall’s Engine,” I said.  “What else?”

“With fifty men? They’d never hold it.  I’m no general, Captain, but even I can see that.”

The sound of feet tramping up the stairs rose behind the door.  No telling whether they were friend or foe.  Nobody was screaming anymore, which did not bode well.

“Worry about the ‘why’ later.  Let’s try not to get gracked now.”  We retraced my steps, but at the next stair I heard voices from below, the click-and-babble language of old Dhojara.  We closed that door and barred it too, tried a third route.

“Running out of options here, Captain,” Nenn said.  I knew that already, so I ignored her.

“We’re not going down now?”

I hesitated.  My pulse was slamming against my half-deaf ears.  The enemy held the gate, and they were moving up through the fortress, killing everything in their path.  I was separated from my crew, and they might all be dead already.

We rounded a corner and came face-to-face with a bunch of drudge emerging from a stairwell.  There were four of them, and we were just two.  Bad odds.  I don’t fight outnumbered and I don’t fight for lost causes.  I would have started running if the first of them hadn’t charged straight at me.

It hadn’t been long since the Deep Kings had changed him.  All the drudge were people before they were drudge, and he could still have passed himself off as one of us.  The build of a farmer, the blank eyes of the enthralled.  Little strips of prayer cloth around his forearms and calves fluttered out behind him as he came at me.  Chop, whack, done. Two seconds of brutality and his story was over.  I didn’t wait for him to realise he was dead, cut him twice more as he went down.  I stepped back, crouching low and bringing my buckler up between me and the others, but they weren’t attacking.  Nenn growled low in her throat, and then I saw the figure behind them.

The boy.  Just a normal-looking little boy, soft and small enough to be ten years old.  Nenn cried out, the sound of her despair more terrible than the violence I’d just worked on the twitching, dying drudge.  I turned to run, but something speared into my mind, tearing the strength from my legs.  I went to my knees.  An ice that came from the child began working its way into my being, a creeping, burrowing maggot.  It entered my thoughts, my will, and, if I had one, my soul.  Pressure began to build behind my eyes, blood ran from my nose, and I sure as hell knew who’d done for the poor bastards we’d found out in the Misery.

I screamed as he began to work through my mind, the ice worm driving into my memories.  I convulsed with the pain, sending a puddle of brown vomit onto the floor.

Absurd though it was, I regretted the waste of the brandy.

The black evil that stems from the deep, dark cold beneath the ocean wrapped me, pierced the marrow of my bones.  A marionette on the child’s dark strings, I rose to face my half-sized master.  A Darling.  Hair shorn close, face plump with puppy fat, it was dressed in a tattered doublet two sizes too large and breeches torn through at the knees like some kind of pauper prince.  The awful malice around his mouth, the cruel hunger in his eyes told me that i was about to die.  It was going to hurt.

“I want the lady!” the Darling declared.  Precocious child tones, but the weight of command belied its true age.  His magic had me by throat and soul both.  I growled.  Tried to fight it, but there’s f***-all you can do against a Darling.  Nenn was choking as invisible hands slowly crushed her throat.  We were both well and truly gracked now he had his spells into us.  The soul-worm turned through my brain, causing me to spasm, and I went down in a heap of uncontrolled limbs, arms and legs just a tangle of meat sticks.

It rifled through my memories.  My first cigar.  Getting sunburned.  Riding a donkey cart to market.  It pried through them, disordered, scattered, looking for something.

“Where is she?” The pressure grew tight around my balls.  My spine protested as invisible hands began to twist me.  Steam rose from the walls,hissing and spitting sparks as the worm twisted back and forth in my mind.  Bones grated in ways that they aren’t intended to do.

I was glad I didn’t know.  I’d have confessed anything just then.

Some poor, unknowing heroes arrived along another corridor.  A young lieutenant and a few stout hearts attacked with no idea what they were facing.  They fired off their matchlocks, managed to down one of the drudge before the Darling turned its attention to them.

The pressure released and the worm slithered out of my mind.  I snatched up my scavenged weapons and dragged Nenn with me, down a corridor and towards a stairwell.  Behind us, I heard the screams as our rescuers learned their mistake.

Clashes of steel and shouting had renewed somewhere below us.  That was good.  We hadn’t lost yet, but I only had escape on what remained of my mind.  We were heading back up now, away from the monstrous little creature and its magic.  You can kill a Darling just like anyone else, but you need numbers, you need luck, and you d*** well can’t let them see you coming.  Fight the battles you can win, run from those you can’t.  Good words to keep you alive.

Set on the ragged edge of a postapocalyptic frontier, Blackwing is a gritty fantasy debut about a man’s desperate battle to survive his own dark destiny…

Nothing in the Misery lasts…

Under a cracked and wailing sky, the Misery is a vast and blighted expanse, created when the Engine, the most powerful weapon in the world, was unleashed against the immortal Deep Kings. Across the wasteland, teeming with corrupted magic and malevolent wraiths, the Deep Kings and their armies are still watching—and still waiting.

Ryhalt Galharrow is no stranger to the Misery. The bounty hunter journeys to a remote outpost, armed for killing both men and monsters, and searching for a mysterious noblewoman. He finds himself in the middle of a shocking attack by the Deep Kings, one that should not be possible. Only a fearsome show of power from the very woman he is seeking saves him.

Once, long ago, he knew the woman well, and together they stumble onto a web of conspiracy that threatens to unmake everything they hold dear and end the fragile peace the Engine has provided. Galharrow is not ready for the truth about the blood he’s spilled and the gods he’s supposed to serve….

Ed McDonald has spent many years dancing between different professions, cities and countries, but the only thing any of them share in common is that they have allowed him enough free time to write. He currently lives with his wife in London, a city that provides him with constant inspiration, where he works as a university lecturer. When he’s not grading essays or wrangling with misbehaving plot lines he can usually be found fencing with longswords, rapiers and pollaxes.

Ed’s debut novel Blackwing is the first part of The Raven’s Mark trilogy. Blackwing will be published on July 20th 2017 by Gollancz in the UK, and October 2017 by Ace in the United States. German, Spanish, French, Hungariann and Russian translations will be available from 2018.