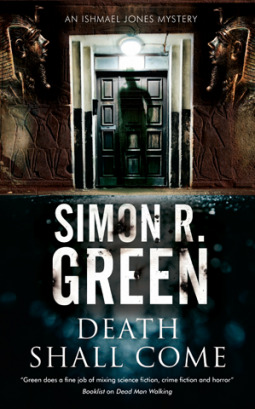 There was nothing welcoming about the house.  It looked like it had been dropped here in the middle of nowhere because nowhere else would have it.  Just looking at the building made my skin crawl.  It felt… spiritually unhealthy, as though the life within it had soured and gone off.

‘You’re frowning,’ said Penny.  ‘Which is rarely a good sign.  Should I be thinking seriously about turning the car round and making a run for it?’

‘No,’ I said.  ‘I promised the Colonel I’d help.  But I have to say I’m worried about this family he’s married into.  How could anything good thrive in a place like this?’

‘It does have a certain oppressive, even soul-destroying quality,’ said Penny.  ‘Could it be Sick Building Syndrome?’

‘More like Put this Unnatural Thing out of its Misery Syndrome,’ I said.

‘Last chance to get the hell out of Dodge, sweetie.’

Penny started singing the theme from the old Addams Family TV show, taking both hands off the steering wheel to do the finger snaps.

When we finally reached the end of the long gravel road, the Colonel was there waiting for us.  Standing stiffly in front of the main entrance, as though silently reprimanding us for being late.  Penny brought the car to a sweeping halt right in front of him, shooting loose gravel in all directions.  The Colonel didn’t even flinch.  Penny shut down the engine with a flourish, and then leant over the steering wheel with an exaggerated groan of relief.  I got out of the car, looked quickly around to assure myself the area was as empty as I thought it was, and then nodded to the Colonel.  Penny half fell out of the driving seat, swore loudly, and slammed the door shut.  She stretched her back, and vigorously massaged her backside with both hands.

‘If I’d known it was going to take this long, I’d have hired a chauffeur!’

‘It’s sweet that you think that.’

We stood together before the Colonel, presenting a unified front in the face of an authority figure.  He nodded briefly to both of us, entirely unmoved by anything he’d seen or heard.  He looked positively imperious in his formal tuxedo, while still maintaining the casual style necessary to carry off such a look.  He sniffed disparagingly at my casual black leather jacket and battered jeans, but managed a small smile for Penny’s powder-blue trouser suit.  Chosen to match her car.  She gave the Colonel a challenging look.

‘Didn’t expect to see me here, did you?’

‘I had hoped Mister Jones would take the hint and come alone,’ the Colonel said calmly, ‘But I gave up expecting him to do the reasonable thing long ago.  I told the Cardavans to expect both of you.  Try not to embarrass me in front of the family.’

‘How did you know to be out here to meet us?’ I said.  ‘I didn’t see any security guards in the grounds.’

‘There aren’t any guards,’ said the Colonel.  ‘The current head of the family doesn’t believe in them.  He prefers extensive electronic surveillance; in the grounds, the perimeter, and most of the surrounding roads.  We knew you were coming before you even approached the gates.  How else do you think we knew to open them for you?’

‘Do the Cardavans really have that many enemies?’ said Penny.

‘There’s nothing like owning a major private collection to make you very concerned about all the people who might want to take it away from you,’ said the Colonel.

‘I didn’t see any cameras,’ I said.  ‘And you know I have more experience than most when it comes to spotting such things.’

‘They’re very well hidden.  Don’t worry, after you’ve left there won’t be any record of your being here.  Because officially you never were.’

Penny bestowed her most dazzling smile on the Colonel.  ‘You’re looking very splendid in your tux, Colonel.  If’ I’d known we were dressing formally for dinner, I’d have packed a more extensive wardrobe.’

I gave her a hard look.  ‘You already packed everything short of the wardrobe.  I strained my back trying to force all your cases into the boot and the back seat.  We’re only here for the weekend!’

‘A girl likes to have choices when it comes to looking her best,’ Penny said airily.  She smiled at the Colonel again.  ‘Ignore Ishmael.  He’s just being Mister Grumpy.’

‘You can leave your cases in the entrance hall,’ said the Colonel.  ‘I want you to meet the family before you go up to your room.  It’s important you make a good first impression, Mister Jones.’

I looked at him thoughtfully.  ‘Anything I should know about before we go in?  Any surprises, or changes in the situation?’

‘Nothing you can’t cope with,’ said the Colonel.  ‘Just try to remember why you’re here.’

Simon was born in Bradford-on-Avon, Wiltshire, England (where he still resides), in 1955. He has obtained an M.A. in Modern English and American Literature from Leicester University and he also studied history and has a combined Humanities degree. His writing career started in 1973, when he was a student in London. His first actual sale was a story titled Manslayer, back in 1976, but it didn’t appear till much later; Awake, Awake…. was his first sale to a professional editor, in 1979. Furthermore he sold some six or seven stories to semi-pro magazines before that market disappeared practically overnight.

After years of publishers’ rejection letters, he sold an incredible seven novels in 1988, just two days after he started working at Bilbo’s bookshop in Bath (this after three and a half years of being unemployed!). This was followed in 1989 by two more, and a commission to write the bestselling novelization of the Kevin Costner film Robin Hood: Prince of Thieves, which has sold more than 370.000 copies.