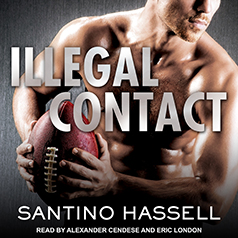 Star football player Gavin Brawley has a temper which has branded him as the bad boy of the NFL. It’s also what landed him under house arrest for six months, benched for the entire season. Recognizing he’ll need help, his manager pushes the solitary Gavin to hire a personal assistant to run the household and help with day-to-day tasks.

Noah Monroe was forced out of his last job after he tried to out his boss for inappropriate behavior. Now he’s desperate to find work, and acting as a PA for a self absorbed jock will have to do. Determined to keep his job, Noah does what it takes to impress Gavin and make the arrangement work. However, when Noah learns Gavin’s secret – that he’s bisexual – Noah wonders if he can fight the constant flirting, or if he’s doomed to repeat past mistakes.

I’ve been wanting to read Santino Hassell for a while now, so I jumped at the chance to review Illegal Contact. Overall, it is an engrossing story with a heartwarming, sexy romance. Gavin and Noah are like two rough-edged pieces that fit together perfectly, once you work to find how they mesh. Both slow to trust, they find common ground because they truly like and respect the other. They want to do things to make the other happy.

The story starts rough. I mean, Gavin has issues. He’s angry. But every time Noah challenges him, Gavin comes back stronger and better. And Noah sees the real person in Gavin-not just some pro-athlete. He stands up for Gavin. Slowly each realizes there are real feelings forming. The characters are given time to work out feelings and issues, creating a stronger bond in the end. Additionally, I appreciate that the author doesn’t blow off the employee-boss relationship and its impact on power exchange. The pair discuss the issues and try to ensure that it’s not part of their relationship, yet it never really goes away – just gets fluffed over by their lust.

In the end, Illegal Contact is a well-written romance filled with real emotion. In a relationship that appears to be doomed before it starts, the author finds a way for love to win in the end. The book doesn’t promise HEA, but I know that Gavin and Noah’s love is strong… It will be interesting to see what happens once their relationship is out in the real world.

New York Barons tight end Gavin Brawley is suspended from the team and on house arrest after a video of him brawling goes viral. Gavin already has a reputation as a jerk with a temper on and off the field – which doesn’t help him once he finds himself on the wrong side of the law. And while he’s been successful professionally, he’s never been lucky when it comes to love.

Noah Monroe is a recent college grad looking for a job – any job – to pay off his mounting student debt. Working as Gavin’s personal assistant/babysitter seems like easy money. But Noah isn’t prepared for the electrifying tension between him and the football player. He’s not sure if he’d rather argue with Gavin or tackle him to the floor. But both men know the score, and neither is sure what will happen once Gavin’s timeout is over.