Today we have a special #audiobook review. It’s time to…

Audiobook Reviews: One Was Lost 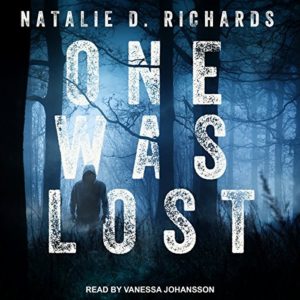 One Was Lost is a very gripping thriller-suspense mystery with a hint of romance.  I enjoyed this chilling tale, enhanced by the narration.

Sera is a high school senior who signs up for a fun hiking/camping trip.  This is a mandatory requirement for seniors, they must complete a “mission.”  It varies from working at a homeless shelter to this wilderness trip.  Sera is talked into the trip by the school’s organizer, a teacher named Mr. Walker.  Six students and Ms. Brighton (another teacher) make up the group.  However, right at the beginning of the trip, the group is split while trying to cross a river during a storm.  Mr. Walker along with Sera, Lucas, Jude, and Emily are able to cross while Ms. Brighton and two other students are left on the other side.  They decide to camp for the night and reconnoiter in the morning.  However the morning brings a ravaged camp, a seriously ill Mr. Walker, and a strange tattoo on each of the students: Damaged, Deceptive, Dangerous, and Darling.

One Was Lost is entirely told from Sera’s perspective.  When she wakes the next morning with her belongings missing or destroyed and the word “Darling” on her arm, Sera thinks it is some strange prank.  She doesn’t realize that it is the first strike in the countdown.  It doesn’t help that Sera does not know the other people in her group well, except for maybe Lucas.  Her brief romantic interlude with him has left her cold.  She fears romance and love ever since her mother fell in love with someone else, leaving her and her father.  Lucas is tattooed with “Dangerous” which furthers Sera’s distrust.  Yet, Sera wants to try to figure out not only how to get out of the wilderness, but also who is seemly hunting them and why.

I was thoroughly engrossed in this young adult thriller/mystery suspense.  The little bit of romance sprinkled in added depth and help to keep Sera off-balance.  I enjoyed the twists and turns in the plot.  The story is far more complicated than it seems and though there are plenty of clues, it was not easy for me to figure out until the end.  Though the story is indicative of some other lost in the woods/killer on the loose stories, it felt genuine and unique to me.

The narration by Ms. Johansson further enhanced my enjoyment of the novel.  She did an excellent job of differentiating voices and adding depth to the characters.  I would listen to another of her narrations again.

If you enjoy a thrilling suspense novel that isn’t overly graphic with a touch of romance, you may just have to pick up One Was Lost.  I highly recommend the audiobook!

My Ratings:
Story: A-
Narration: A
Overall: A

Damaged. Deceptive. Dangerous. Darling. Are they labels or a warning? The answer could cost Sera everything.

Murder, justice, and revenge were so not a part of the plan when Sera set out on her senior camping trip. After all, hiking through the woods is supposed to be safe and uneventful.

Then one morning the group wakes up groggy, confused, and with words scrawled on their wrists: Damaged. Deceptive. Dangerous. Darling. Their supplies? Destroyed. Half their group? Gone. Their chaperone? Unconscious. Worst of all, they find four dolls acting out a murder—dolls dressed just like them.

Suddenly it’s clear; they’re being hunted. And with the only positive word on her wrist, Sera falls under suspicion…