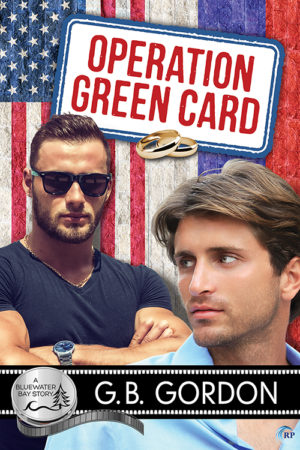 Though the Bluewater Bay series is drawing to a close, I was happy to see that the storytelling that originally pulled me in is just as strong as ever. Despite an initial moment or two of hesitation on my part, Operation Green Card, by G.B. Gordon, turned out to be a very sweet, hopeful tale of against-the-odds romance that I ended up enjoying quite a lot.

Jason, whom we briefly met in Bluewater Blues, is as solitary as anyone could possibly be, keeping everyone—including his own daughter—at a distance. Between not wanting to be hurt, and not wanting to hurt those he cares about, he’s far too lonely for someone with such a giving heart. Arkady, whose loneliness is borne of fear and necessity, isn’t prepared to need anything more from Jason than the means to acquire his green card. But, having always wanted a family to call his own, he quickly realizes that almost finding one only to lose them again too soon might be more heartache than he can bear.

While I ended up getting into Operation Green Card fairly well, there were a few things—that were mostly tied to Jason’s part of the story—which I had a little more difficulty accepting at first. I felt that his will to provide for his daughter was wonderful, but it made his determination to risk imprisonment if he and Arkady are caught seem somewhat reckless by comparison. And although I get why he’d want to avoid any pity that might come from those around him knowing about his prosthesis, I just couldn’t see how he planned to keep it a secret from the man who was supposed to be his husband—or how he thought immigration would react under those circumstances.

Before long, however, I was very much interested in Arkady and Jason’s story, and eager for them to work things out. I found both men to be interesting characters, but, by the end, it was Arkady that I’d become most attached to. Open, giving, and ready to live and love again, I really wanted him to be happy, especially knowing he was exactly what Jason needed, too.

Even with the moments that caused me to stumble a bit in my reading, I couldn’t help but cheer Jason and Arkady on in the end. The author took what could have been a fairly common theme (a green card marriage), and turned it into a love story worth believing in. I’ve been invested in the Bluewater Bay series for a long time now, and found Operation Green Card to be both an endearing and welcome addition.

Arkady Izmaylov is a family man. He’s also gay. In Russia. His sister Natalya has been telling him to get out for years, but it’s only after an attack in the street that he finally concedes and says yes to her desperate plan of him marrying a stranger for a green card.

Jason Cooley was taught from birth that he’s no good to anyone. Then the military taught him he was good enough to save other lives, but that purpose got amputated along with his leg. He’s now working security at Wolf’s Landing and sending monthly checks to his ex for their daughter’s education. When Natalya asks him to marry her brother, Jason knows right away he’ll do it more for the mission than the money she’s offering. But when he actually meets Arkady, his mission turns complicated.

Jason quickly discovers he’s not as straight as he thought. He’s also the man of Arkady’s dreams. Arkady must convince Jason that he’s worth loving, and that Arkady won’t disappear from his life like everyone else. Because Arkady has always wanted a family of his own, and he’s not letting go of this one.

Check it out at Riptide Publishing!

G.B. Gordon worked as a packer, landscaper, waiter, and coach before going back to school to major in linguistics and, at 35, switch to less backbreaking monetary pursuits like translating, editing, and writing.

Having lived in various parts of the world, Gordon is now happily ensconced in suburban Ontario with the best of all husbands.

To celebrate the release of Operation Green Card, one lucky winner will receive a $10 Riptide credit! Leave a comment with your contact info to enter the contest. Entries close at midnight, Eastern time, on December 16, 2017. Contest is NOT restricted to U.S. entries. Thanks for following the tour, and don’t forget to leave your contact info!