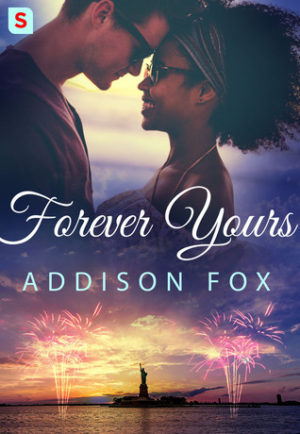 Forever Yours is the third installment in the Brooklyn Brotherhood series. The brief novella takes advantage of a lengthy history between Jasmine “Jaz” Shane and Cade Rossi. We were introduced to these characters in the last book Just Once. Jasmine is Detective Daphne Rossi’s life long best friend and Cade is Daphne’s older brother, also a member of the NYPD.  Jaz has been in love with Cade since she was nine years old.  Cade knows everything there is to know about Jaz, but has only recently begun to realize she may be the right woman for him.

These two have not flirted in the traditional sense as the book description suggests.  Rather they have been sparing like near-siblings in their own form of foreplay. A catalyst incident moves them out of their bickering and into relationship territory, for which they are the only ones who seem surprised.  Because it takes history for granted, it really should be read in order rather than taken as a standalone. Also, because that history is assumed, we can jump from the friend zone into a forever relationship in just 100 or pages.

I hope Fox takes on subjects in future books that are brought up in Forever Yours, but not really addressed.  Some of those subjects include racism and sexual assault.  They are too significant to ignore in the lives of her characters given the Brooklyn, New York backdrop.  Book four, Only You, comes out this month.

Detective Cade Rossi has spent the majority of his life oblivious to Jasmine Shane. She’s always been his little sister’s best friend, but after coming to her rescue one night, Cade is starting to see the woman behind the lawyerly suits.

Since childhood, Jasmine has harbored an embarrassing crush on Cade. She’s seen him work his way through nearly every eligible bachelorette in Park Heights, Brooklyn, and Jasmine’s given up hope of them ever having a chance together.

But summer is the perfect time for a fling, and as Cade and Jasmine grow closer, what starts out as an innocent flirtation could turn into so much more…