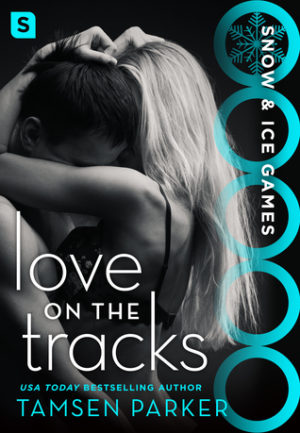 At only 20 years old, Rowan Andrews is competing in her second Snow and Ice Games (SIGs). She has dedicated her whole life to training for the sport she loves: luge. Entering the games as a medal contender for the United States, nothing can throw Rowan off her game. That is until she meets her celebrity crush, singer Zane Rivera.

Zane Rivera, lead singer for an insanely popular boy band, needs a break from his bandmates and the craziness of his life, so when the opportunity arises to surprise his fan, and SIG superstar, Rowan, he takes an impromptu trip to Denver. Once America gets a taste of Rowan and Zane together, they want more, and the pair fake a few dates, hoping to increase their social media coverage. However, the fake dates are starting to feel like the real deal.

Overall, I enjoyed Love on the Tracks, and found it to be a solid, entertaining start to this new series. I enjoyed the descriptions and feel of the games and what it means to be a professional/serious athlete. The author does a fabulous job putting me inside the heart and mind of Rowan, learning the ups and downs of such an intense lifestyle.

With that said, Rowan was difficult for me to connect with. I like that her sport comes first and that she goes after what she wants without (much) hesitation. She’s strong and unusually mature beyond her 20 years. Yet, I did struggle a bit with her age and maturity level at the start of the book. I suppose because it’s been way too long since I’ve been that age, it was difficult for me to relate to her. But she stays true to her heart and dreams, which I really liked.

Zane is a sweet and caring guy; not the typical Justin Bieber asshole popstar. He’s also pretty young, but at 26, and after a decade of touring, he feels like an old soul. He’s perfect for Rowan because he cares and won’t let his agent dictate all of his moves. He’s loyal to his bandmates, friends, and family, so it’s no surprise that he treats Rowan with utter respect. At first it was hard for me to get into their relationship – they felt so young, especially her, but after I got into the story, that all went away. And I really like how he doesn’t mope when things appear not to be going right… he takes matters into his own hands.

The story itself is short and straightforward. When issues come about, problem-solving is streamlined and everything wraps up nicely. I would have preferred no “I love you’s,” but it’s the way it goes. The story still has an HFN vibe, which is right for the romance and characters.

After reading Love on the Tracks, I am excited to find out more about some of the other athletes and discover what else happens at the Snow and Ice Games. With the lighter romance and shorter length, the book was a breeze to read, and it’s got me excited for the Winter Olympics coming this February in South Korea.

My Rating: B/B-  Liked It, but I had a few small issues

Welcome to the Snow and Ice Games where the competition is fierce and the romance is HOT.

Rowan Andrews is the unexpected darling of the Denver Snow and Ice Games. Luge has never captured the American public’s imagination as much as figure skating or even hockey, but her outsized personality and dare-devil ways have got everyone’s eyes glued to the track. Including a certain chart-topping heartthrob.

Zane Rivera is the lead singer of License to Game, the hottest band in the country. When Zane finds out Rowan Andrews has had some complimentary things to say about him, he arranges to meet her while he’s in Denver enjoying the games. And when a photo of him kissing Rowan on the cheek goes viral, they both see the advantages of faking a relationship for the publicity.

After Rowan’s injured in her final race, their relationship starts to feel all too real to Zane. But is this rock star ready to fall in love?