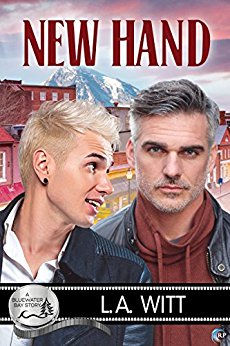 Having read nearly every Bluewater Bay story since the beginning, I’ve been increasingly anxious lately about the series’ end. Many of the characters introduced in these titles have meant a great deal to me, the glimpses into lives that might be led making me think about how I view the world on the other side of my own door. New Hand, the final book in the series by inaugural author L.A. Witt, brings everything to a close in some very familiar ways: with heartache, laughter, hope, and a lot of love.

Though every character in the Bluewater Bay universe has had significant conflict to work through, Jesse and Garrett face an uphill battle from minute one. Garret’s (ongoing) grieving, Jesse’s (also ongoing) experiences with regards to his status, their age difference, lingering wariness from previous relationships, and—of course—the opinions of others all contribute to an intimidating assemblage of obstacles that tests both men throughout the narrative.

One of the longer titles in the series, New Hand covers a lot of territory as Jesse and Garrett navigate the beginning of their relationship. The loss of Garrett’s husband illustrates the very personal nature of grief, and the ease with which those around us can affect that process. How soon is too soon to love again? And who gets to decide? Another complication which I’d originally thought applied more to Garrett—that some burdens simply aren’t transferrable nor shareable—actually applies to both men. As does the fact that similarities between two people doesn’t make one a replacement for another. Even though all these issues and questions are extremely important, the “informative” feel of some of these passages did seem to weigh the story down in places.

While I liked Garrett—and adored Jesse—my favorite part of New Hand was the return of the main characters of the previous title, Outside the Lines. I knew they’d be back, but I was thrilled with how often they appeared in Jesse and Garrett’s story. Simon and Ian were a welcome sight, but Lydia is still just about the best thing ever. In truth, I don’t think the story would have worked nearly as well without her being there as much as she was.

The Bluewater Bay series has always been unique among many of the other long-running series I’ve read. The thoughtful, and generally respectful, approach the authors tried to take with regards to the lives of the characters made it a favorite early on, and I’ll miss the anticipation of waiting for the next story to come out. Still, Outside the Lines and New Hand were a pleasure and left Wolf’s Landing and the town itself in a good place, making saying goodbye a little easier.

Months after his husband’s death, Garrett Blaine desperately needs a fresh start. He sells his house in Seattle, leaves his accounting job, and starts bartending in Bluewater Bay. There he meets a man who wakes up his nearly forgotten libido.

Jesse Connelly’s friend with benefits bolted after Jesse disclosed his HIV status. Stood up and stinging, Jesse tries to drown his sorrows . . . and finds an unexpected connection with a lonely bartender.

Jesse and Garrett quickly bond over a shared love of comics and card games, and they can’t get enough of each other between the sheets. Not even a bumpy start and a fifteen-year age gap can derail them as they go from strangers to lovers, then friends, then much more.

But as Garrett’s feelings for Jesse deepen, so does his grief for the man he lost—especially as he sees hints of his late husband in his new boyfriend. Now Garrett has to figure out if Jesse is his second chance at true love, or if Jesse’s just filling in for the man he’s never fully grieved. And he needs to figure it out soon, because Jesse’s starting to wonder the same thing.