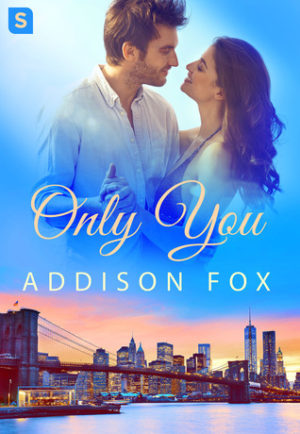 Only You
Author: Addison Fox
Reviewer: Nima
Rating: B

Only You ties up the love stories of the Brooklyn Brotherhood, three boys from troubled homes adopted by “Mama Lou.”  Each of them has grown up to be respectable, hardworking men.  Each is on a course as different as their personalities, but together, they make a close, if unlikely family. This last story is for Fender Blackstone, the poor boy who’s father was not only alcoholic and abusive, but criminal. Fender has learned to be defensive, careful, and to keep his world very small.

Fender finds himself in love with a girl from the right side of the tracks, Manhattan’s elite Harlow Reynolds.  Harlow curates a gallery, she’s well educated and elegant—and the daughter of the man Mama Lou had an affair with decades before.  The books should definitely be read in order as many parts of previous books weave together in this last installment to make the idea of Harlow and Fender being together more than just inconvenient.

It may have started in simple chemistry, but as these two get to know each other, the impediments grow larger.  I appreciated that they handled their differences primarily in adult ways.  There was no immature pouting or walking off before someone could explain  relevant circumstances.  There were, however, significant circumstances to work through.  It’s disingenuous to suggest people should just go be with anyone they want to be with.  The reality is that when someone loves their family too, you can’t live in a love bubble and just expect everything to be alright.  You have to deal with the hard stuff.  Most of Only You deals with the hard stuff and does it pretty well.

Note: the following paragraph contains a ***SPOILER ALERT*** which is included because it impacted my rating of the book

In an effort to conclude the story quickly, there was a sexual innuendo made between Fender and Harlow, cementing their new relationship as a real thing.  There was nothing wrong with the comment, just the placement.  At that point, they were still standing over Fender’s dead father, well near it.  No matter how relieved Fender was to have Trent out of his life and Harlow in it in that moment, the sexual comment was just really out of place.  It tweaked my enjoyment of the story and was still lingering even though Fox pulled the mood back up in her epilogue.

Fender Blackstone has kept the world at arm’s length, with the exception of his adoptive brothers and Mama Lou, the woman who saved him. Fender is willing to do everything he can to support Lou, but he finds himself drawn to Harlow Reynolds: the daughter of the woman who could destroy everything Lou has worked for.

Even without the emotional turmoil between their families, why would a woman from the highest echelons of Manhattan society ever look twice at a kid from Brooklyn? As forbidden sparks flare between them, Fender and Harlow realize there’s something real forming between them. When Fender’s past resurfaces and threatens the life he’s built, can his love for Harlow survive the aftermath?