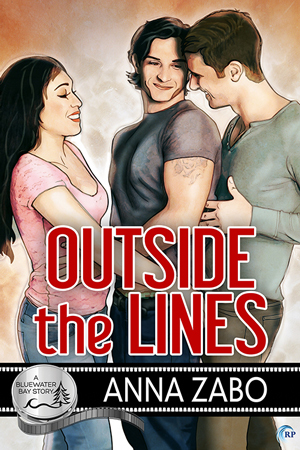 Outside The Lines
Author: Anna Zabo
Reviewer: B.
Rating: A

Finding romance—or even the occasional hookup—in a little town like Bluewater Bay has been far more complicated than miniature set designer Ian Meyers would have liked. Meeting a gay man not involved with Wolf’s Landing isn’t all that easy, plus there’s always a chance that they’ll try to use him to be closer to the show. Going home with someone from work is just begging for a lot of awkward afterwards, and is a bad idea all around. Giving up on the whole thing seems like his only option, at least until a collision between his finished model and a stuntman leads him to the local hobby shop—and Simon Derry.

Sweet, geeky, and completely adorable, Simon is exactly the kind of guy Ian’s been looking for. As if the ideal mix between shy and flirty wasn’t enough to make Ian want him, Simon is also a highly skilled miniature painter himself, and is willing to work by Ian’s side to get his set repaired on time. Add to that Simon’s obvious (and welcome) interest, and the situation would be absolutely perfect—if it weren’t for Simon’s wife.

Having enjoyed another title I’ve read by this author, I was very excited to see what they might bring to the Bluewater Bay universe. After reading Outside the Lines, I can say that it’s easily one of my favorites of the entire series. Somehow capturing the ZING! of Simon and Ian’s new relationship energy and combining it with the comfort, support, and irrefutable trust that anchors Simon’s marriage to Lydia, Anna Zabo has crafted a truly beautiful love story.

Without a doubt, there is a lot going on in this story. Outside the Lines examines the distinction between polyamory and open relationships, bisexuality and acceptance, romantic versus sexual attraction, a couple of different kinds of kink, and more. That said, not once did I get the impression that the author was ticking boxes on a list, nor did the tone ever shift to preachy. On the contrary, while fundamental to the makeup of the main characters, those things seemed almost tertiary to the larger, and more basic, feeling of warmth and wanting between people in love.

Though we only see the events of the narrative from Simon and Ian’s POVs, I was most taken with Simon’s wife, Lydia. She is rock solid all the way through, only needing support in return towards the end of the story. While Simon and Ian wrestle with their own doubts and fears, it is Lydia who provides a foundation strong enough for all three of them to build on. She’s a fantastic character, and deserves every bit of happiness that both men can give her.

As the series winds down, I’m happy that Outside the Lines was made part of it before the very end. At once complicated, yet not, it was a welcome and well-written reminder that there are infinite, magnificent ways to love. Anna Zabo has proven, again, that they are an author to watch, imbuing these characters with heart as well as life. Though Lydia, Simon, and Ian’s story is complete, I hope to see more of them in the next, and final, story from Bluewater Bay.

Miniature artist Ian Meyers has one week to rebuild his damaged set. Needing help, he goes to End o’ Earth, the local comic and gaming shop. Owner Simon Derry pushes all of Ian’s buttons, and he also has steady hands and the skills Ian needs.

Ian’s all in, and it’s fantastic working with Simon to piece together his set and then take each other apart at night. His friendship with Lydia grows too. The only problem is, the more time he spends with Simon, the more he wants everything Simon already has with Lydia: A house. A cat. A commitment. So Ian runs, and shatters the trust he has with them both—right when they need him the most. Piecing their relationships back together might prove harder than a smashed set.