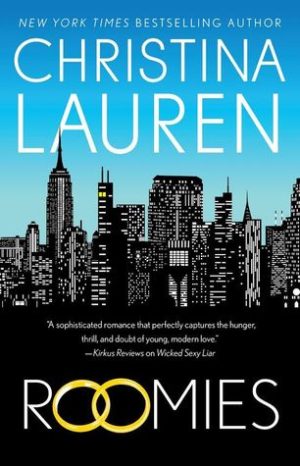 Holland, born in a cab and the youngest of six kids, lives in Manhattan on the support of her doting uncles, who are more like fathers. She has a masters degree in fine arts – an aspiring writing, who isn’t writing. She’s got little direction in her life, but when an accident puts her in contact with the subway busker she’s been crushing on for six months, Holland’s life turns upside down.

With a little bit of the 1995 Sandra Bullock movie, While You Were Sleeping, and a little bit of the 1991 film, Green Card, Roomies is a delightful romance about self-discovery and making dreams come true. When Holland finds a way to help her Uncle Robert with his broadway musical by marrying classical guitarist Calvin so he can stay in country, she decides to go for it. It’s a turning point for Holland who realizes she wants to marry Calvin because she never takes risks, and at twenty-five years old, is bored with life. She recognizes that maybe the reason she can’t write is because she’s not really living.

Through Holland’s eyes we get to know Calvin, who is charming, sexy, sweet, and kind. He’s humble and gracious, and readers can tell that it’s not just Holland’s rose-colored, lustful glasses that filter how we see Calvin. There are stumbles, and yet, he continues to shine. Holland always puts the needs of others before her own. It’s through the getting-to-know each other process (for the green card application), that Holland recognizes some things about herself; that she’s a supporting character in her own life. And this is what eventually drives Holland to become more than a supporting character.

Additionally, Holland doesn’t feel worthy of Calvin’s affection, and as they get to know one another, we experience the range of Holland’s feelings, most of all her uncertainty. The wondering if Calvin’s flirtatious actions are true or for show… my heart was pounding along side of Holland’s. Her flaws make her real and on some level, all of her insecurities are familiar: that piece of Holland that is always trying to help others. Who is unsure of where to go with life. Who doubts she can find true meaning and love in her life.

Honestly, my only complaint is I wanted more. Although we get to see a lot of the pair as a couple and falling in love, it’s always tarnished a bit by the pressure of the fake marriage and getting a green card. Once things are real and after the pain, I wanted more. To know they are going to make it. It ended too quickly for me, but at the same time, I can appreciate that the story was over.

In the end, Roomies isn’t overly complicated or complex, but it is rich in detail and has all the feels. Deep feels. The descriptions of the music, of Holland listening to Calvin play, it is more than just an appreciation for beautiful things. It is life-changing—reaching into Holland’s soul. Seeing the world through Holland’s eyes, readers get their heart broken by and fall in love with Calvin. It’s a beautiful journey, one that I highly recommend.

Marriages of convenience are so . . .  inconvenient.

Rescued by Calvin McLoughlin from a would-be subway attacker, Holland Bakker pays the brilliant musician back by pulling some of her errand-girl strings and getting him an audition with a bigtime musical director. When the tryout goes better than even Holland could have imagined, Calvin is set for a great entre into Broadway—until he admits his student visa has expired and he’s in the country illegally.

Holland impulsively offers to wed the Irishman to keep him in New York, her growing infatuation a secret only to him. As their relationship evolves from awkward roommates to besotted lovers, Calvin becomes the darling of Broadway. In the middle of the theatrics and the acting-not-acting, what will it take for Holland and Calvin to realize they both stopped pretending a long time ago?