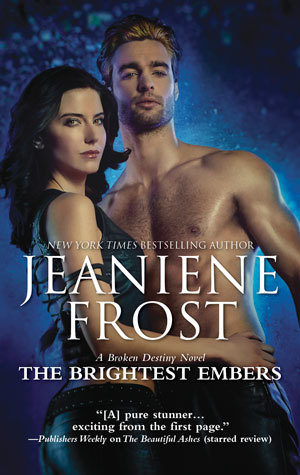 The Brightest Embers is the final novel in the Broken Destiny trilogy.  Although the overall ending was pleasantly surprising and gripping, the constant angst of Ivy and Adrian’s relationship grated.

First, the world is fascinating.  Ivy, the last descendent of David (the boy who felled the giant Goliath), has the power and opportunity to recover three ancient and powerful blessed weapons to stop the demons who are trying to take over our world.  Standing in her way is Adrian, the last descendent of Judas, who is destined to betray the descendent of David.  The Romeo and Juliet twist made the destiny of Ivy and Adrian compelling.  They fall in love and yet he is destined to betray her.

Adrian was raised by demons.  He is compelled by vengeance to do anything to ensure the demons do not win.  However, his desire for revenge is derailed by his love for Ivy.  He would do anything to protect her.  We don’t know why she is always so surprised when he breaks his word, omits things, or misdirects her in order to keep her safe.  Her mission is to save the world, we get it, but love makes people do crazy (and stupid) things.  For two adults, they sure do act like they are still in high school at times.

We love Brutus, the gargoyle.  He’s like a giant flying puppy.  He was a wonderful addition to the group of heroes.  The relationship between Costa and Adrian, though complicated, was touching.  We’re not sure how Jasmine and Costa will fare once the threat of the end of the world is gone.  The novel ends after the conclusion of the final battle leaving much for us to ponder.

Although the strife between Ivy and Adrian was frustrating, we liked how the overall story played out.  The ending of this trilogy was satisfying, but we would have enjoyed a little more of an epilogue.  This lack leads us to think and hope that there might be a novella or another story in this world.

You can run from your destiny, but you can’t hide

Ivy thought that she and Adrian had conquered their fates. Yet with thousands of innocents still trapped in the demon realms, she’s determined to locate the final hallowed weapon and harness its unparalleled power to free them. But the last relic nearly put Ivy in the grave—there’s probably no coming back from this one.

Adrian’s dark lineage has made him the most powerful of his kind, yet even his incredible abilities might not be enough now. Instead, the treacherous fate he has fought so hard to escape might be the only way he can save Ivy. Their scintillating bond has been tested before, but never with so much on the line. Now fate will come head-to-head against true love, and nothing they’ve endured can prepare Ivy and Adrian for the unthinkable choices they’ll face…