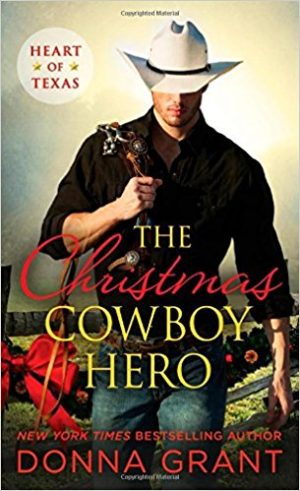 Yes, please! A new series from Donna Grant! Combining military with cowboys? Yummy! The Heart of Texas series is going to be my new military/cowboy go-to.

In The Christmas Cowboy Hero, Clayton is our tortured hero. You’d think that having been a Navy SEAL would harden him against all the touchy-feely stuff. Totally not so, and poor Clayton has more to deal with than the average SEAL. I really liked Clayton’s characterization because it seemed like there were real issues he was taking care of and he buried some things from his past super deep so he could move on with his life. Funny how that doesn’t work out, huh? With all the things going on at the family ranch, seems like Clayton needs someone by his side.

Enter Abby Harper. I’m pretty sure that Abby should be named Ms. Selfless Heroine 2017. When her brother gets in over his head, Abby is there for him—which brings us to how Abby and Clayton meet. As an overprotective mom, I had to suspend belief for a few beats until I got back into the story when Abby made some of her choices. But, honestly? It wasn’t a big deal. I’m the mom who has daily contact with her college junior. LOL.

Watching the relationship between Abby and Clayton develop was wonderful—the slow-burn between them drew me in and kept me reading as their characters grew and blossomed. The changes between the characters at the end compared to the beginning? Absolutely lovely.

As secondary characters, Abby’s brothers as well as Clayton’s parents and a particular ranch hand were prominent. Even with a larger cast of characters, Ms. Grant made each unique and fully developed—which I appreciate.

I almost thought we were going to get a surprise pregnancy, but I’m happy with the outcome—I think the characters wouldn’t have handled the alternative. I’m excited to read the next installment of the Heart of Texas series!

’Tis the season for ex-Navy SEAL Clayton East to come home for the holidays―even if the mood at home is anything but festive. His father is ill. The East Ranch is in financial trouble. And now it’s on Clayton, the prodigal son, to make sure his family doesn’t lose everything.

Headstrong Abby Harper is like a mother to her younger brothers, who she’s helped raise since she was a teenager. Keeping them in line is no small task while she’s also working toward her college degree. And now that one of her brothers has been arrested for stealing cattle at the East Ranch, Abby is at her wit’s end. But there is a silver lining: Clayton East. He believes in second chances, and is willing to give one to her brother this Christmas. Letting beautiful Abby―and the inescapable longing in his heart―off the hook, however, is a whole ’nother story. Could it be that the woman of this local hero’s dreams has been back at home all along?