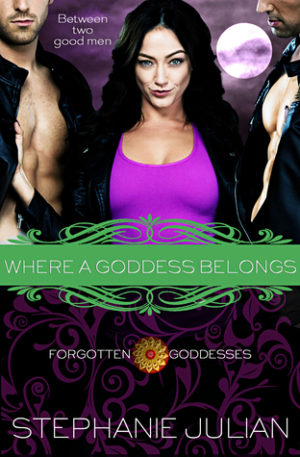 Kari is the Etruscan Goddess of Health, and although she and her sisters are mostly forgotten by the modern world, Kari has been able to maintain a high level of power. Allowing herself to remain captive for three months, Kari is waiting for the right time to share the truth, and her love, with the two men she knows she was meant to be with.

Jacoby and Den have been friends since childhood, both coming from dark magic Malandante families. They’ve kept hidden their true abilities, waiting for the best time to make a break from their evil families. Now is crunch time, and they have to decide if they can trust Kari and the Lucani wolves.

While it’s been a few years since the previous book, I was able to jump back into the Forgotten Goddesses series with relative ease. Where a Goddess Belongs is part of the larger series plot, forwarding the story arc and involving characters from both this series and the Lucani Lovers series. However, it’s written to be a standalone romance and contains enough backstory and detail that one could jump in with this book. As I read on, bits and pieces of the world filtered back, filling in any gaps.

The romance between Kari and her men is the focus of the book. As with most paranormal romances, the characters connect quickly, as if fate brought them together for a purpose. In fact, Kari even says a quick prayer to her sister, the goddess of fate, thanking her for bringing Jacoby and Den to her. Having been their “captive” (she could have easily escaped) for a few months gives some weight to the speed at which the coupling occurs. Each had been observing the other, lusting after the other, knowing their pairing would occur eventually. (They are a ménage but no m/m.)

While the romance aspect of the story has a clear path, the overall story arc feels a bit incomplete, or rather like a few chapters from a larger tale. The Mal are trying to take Kari and force her powers on to one of their own children, giving them control. But we’ve yet to fully understand the Mal’s goals and intent. And while the romance finalized by the end of the book, there is no closure on much of the other elements of the book—things brought up but then dropped without further mention or follow up. I was also disappointed by the lack of insight and healing for Jacoby, who struggles with the depth of his powers and the results of his actions. Finally, there were a couple of sections that seemed contradictory and caused me some confusion.

In the end, I enjoyed my time back with the goddesses and Lucani. I look at Where a Goddess Belongs as a re-introduction to the series, with hopes the author continues to develop the overall story arc in future titles.

No escape, no fun, no sex… What’s a forgotten goddess to do?

It’s been three months since Kari, an Etruscan Goddess, was kidnapped and her two hot captors have yet to lay a hand on her. She hasn’t been playing hard to get. In fact, she’s made it clear she’d be more than happy to pass the time more…pleasurably. Yes, Den and Jacoby may work for the Malandante, but they’re not evil. They’re yummy.

Den would gladly give Kari everything and anything she wants. He wants to take her up on the offer in her teasing smile, but he needs something in return. His mother is dying and he needs Kari to help him get her to help…to the wolf shifters who would shoot Den and Jacoby on sight.

Jacoby also needs Kari’s help to get his sister Emelia away from his father. Emelia has been identified as a new goddess, Kari’s replacement, as a matter of fact. Jacoby will do whatever it takes to make sure his father can’t corrupt Emelia. If that means defecting to the shifters, no problem. Especially if that also means he can continue to see Kari.

But even the best-laid plans can go wrong…and when Kari, Jacoby and Den need to rescue Emelia, none of them expect the fight to cost more than they’re willing to pay.