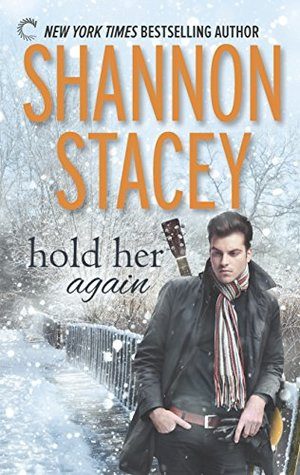 Jace spotted her when she was about ten feet from the stage and, after a few seconds of eye contact, a slow smile spread over his face. And then the crowd realized what was happening and the applause and the whistles started as she climbed the two steps onto the wooden stage. Butterflies danced in her stomach and she might have bolted for the door, but Jace held out his hand.

She let herself take hold of it without thinking, and his fingers curled around the edge of her hand, pulling her toward the microphone.

“Y’all know we’re raising money for the Santa fund tonight,” Jace said into the microphone, turning back to the crowd without letting go of her hand. “And I hope you’ll dig deep because it means a lot to me. Back in the day, when times were tough, the Santa fund brought me joy. And now it’s brought me joy again because all I wanted for Christmas this year was for Ava Wright to sing with me again.”

He was playing to the crowd, she told herself as his words caused warmth to seep through her. Jace Morrow could always sing, but he’d learned about performing while he was away, and he knew how to get these people to open their wallets. But no matter how much she tried to resist it, the emotion in his voice got all mixed up with the sweet memories of being on stage with him in the past and her heart pounded in her chest.

Then he looked back at her and grinned. “I guess I must have been a good boy this year.”

The crowd hooted and hollered, but Ava barely heard them. She felt the answering grin curving her mouth and was powerless to stop it. “I seriously doubt that.”

He laughed and then let go of her hand to play the opening bars of “Winter Wonderland”. It was an easy song to sing and one she’d always had a lot of fun with, so she was happy he opened with it.

She thought it would hurt more, singing with Jace again. But it was so natural—so right—that she lost herself in the songs and the harmonizing. By the fourth song, which was “Away In A Manger” by request from a child in the audience, she was having fun, but could also feel the strain in her throat. It had been a long time.

Ava Wright isn’t happy to see her high school sweetheart rolling into their hometown a few weeks before Christmas. He’s only come back to bury his estranged father, but there’s no way she’ll be able to avoid him. No one can: he’s become a country-music superstar since going solo and leaving Ava behind.

Jace Morrow grew up believing “money can’t buy happiness” was something people said to make themselves feel better. But now he knows it’s the truth: no matter how many number-one hits he has, he’ll never recapture the magic of singing with Ava. Missing her—loving her—and living with making the wrong choice in life were what made him who he is.

When Jace is roped into being part of the town’s annual Christmas party, he only cares about earning Ava’s forgiveness. And though Ava’s heart has never healed, she loved Jace too much and for too long to shut him out when he’s hurting. As they fall in love all over again, they’re both faced with choices for their future…and this time Jace intends to make the right one.