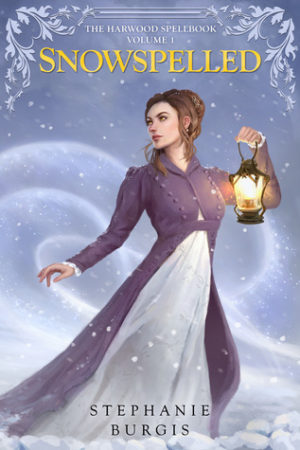 They were all gone a moment later, along with the servants who’d led their way.  Even their hushed voices disappeared behind the closed door of the parlor in the distance, shutting out any possible eavesdroppers.  Letting out my held breath, I sagged against the wall and closed my eyes.

I needed a moment to recover before I walked on and joined them.  Just one moment… one more moment…

“Hmm,” said an all-too-familiar voice close to my ear, with wicked amusement.  “Rather too much joy with the elven wine, eh, Harwood?”

“Oh, shush,” I slitted my eyes open just wide enough to glare at my ex-fiance, who was leaning indolently beside me with one shoulder propped against the wall.  “You would have drunk too much wine, too, if you’d been trapped in that conversation all through supper.”

“What, you weren’t fascinated to learn all of Sansom’s great secrets?”  Wrexham shook his head at me, his mischievous grin shifting into something more wry…or even affectionate?  No, that must have been the elven wine distorting my perceptions again.  “I would have warned you, you know, if you’d only bothered to ask me first.  I ran into Sansom at an incident up north last year, when he was chanting at the moon and ran afoul of a local group of fairies.  He may be the most earnest and well-meaning would-be Druid of our age, but he certainly hasn’t the power to bring about our current snowstorm.”

“No one does,” I said on a yawn.  “That’s the whole problem.”  The corridor shimmered in my vision, and Wrexham’s strong shoulder was beginning to look dangerously tempting.  If I could just rest my head there for a moment, while I regained my balance… “Even I never imagined that I had that much power.  We’re not elves, damn it, we’re only human.”

“That’s why we work together, not alone,” he said softly.  “But…ah.”  He let out a sigh as I shifted infinitesimally closer.  “Never mind.  You’re tipsy on elven wine.  It wouldn’t be a fair fight, would it?”

“What?” I frowned muzzily at him.

Were we fighting again?  No, wait, of course we were-we must be, because I’d been forcing quarrels with him for over two months now, but still…

“Shh,” he murmured, as he reached out to run lone long finger along the side of my cheek.  “Just for once, let me help you.  Just this once.”  His voice dropped to a whisper.

His fingers had always been so clever.

But I’d been wrong earlier, when I’d thought that his rueful grin was his most appealing expression.  How could I ever have forgotten?

The intent expression he wore when he was casting magic was even better.

His spell rippled through me like sweet relief, lifting the dizziness and the beginnings of nausea like a clinging set of veils that he was drawing gently from my skin.

The unnatural warmth of the wine lifted with them.  But what remained, as my head and vision finally cleared…

His dark eyes gazed into mine from only inches away, his head bent over mine, with his soft, glossy black hair falling into his face…more than close enough to touch.

I knew exactly how it would feel against my fingers.

I had never been able to forget.

My breath came quickly in my chest.

But it had been so long since we’d done this.  So unbearably long…

He always had been.

Slowly, carefully, he shifted toward me, lowering his right arm to his side and leaving me a clear space to escape.

If I only wanted to.

Holding my breath, I rose on tiptoes…

We sprang apart.  I was panting, my heart galloping painfully in my chest, as I stared uncomprehendingly at my older brother… who stood just before the open doorway of the dining room, watching us with barely-suppressed hilarity.

“So sorry to interrupt,” Jonathan declared, sweeping an elegant bow.  “But I did think I’d better warn you, in case you hadn’t noticed the housemaid passing by, that the rest of the gentlemen are all about to come stampeding out here on their way to the parlor.  So…” His lips widened into an outright, maddening smirk.  “Don’t you think you two ought to find a nice cozy broom closet before you go any further with this sort of thing’?

I stared at him, wordless, for one frozen moment.  Then Wrexham shifted beside me, drawing in a breath, and I began to turn toward him-

And my reason finally, finally came crashing back into me.

My jaw dropped open.  Heat swept through my body.  But this time, it wasn’t elven wine or excitement.

It was pure, unalloyed shame.

I swore that I would let him go.

If we’d waited even one moment longer-if Johnathan hadn’t warned us-every gossiping magician in Cosgrave Manor would have seen us embracing and spread the news like wildfire.

Within minutes, Wrexham would have been hopelessly compromised…and nothing I said or did after that could have released him except for our marriage.

How could I have been so careless?

With a moan of guilt, I turned and fled through Cosgrave Manor all the way to my room without a single glance back.

In nineteenth-century Angland, magic is reserved for gentlemen while ladies attend to the more practical business of politics. But Cassandra Harwood has never followed the rules…

Four months ago, Cassandra Harwood was the first woman magician in Angland, and she was betrothed to the brilliant, intense love of her life.

Now Cassandra is trapped in a snowbound house party deep in the elven dales, surrounded by bickering gentleman magicians, manipulative lady politicians, her own interfering family members, and, worst of all, her infuriatingly stubborn ex-fiancé, who refuses to understand that she’s given him up for his own good.

But the greatest danger of all lies outside the manor in the falling snow, where a powerful and malevolent elf-lord lurks…and Cassandra lost all of her own magic four months ago.

To save herself, Cassandra will have to discover exactly what inner powers she still possesses – and risk everything to win a new kind of happiness.

A witty and sparkling romantic fantasy novella that opens a brand-new series for adults from the author of Kat, Incorrigible, Masks and Shadows and Congress of Secrets.

Stephanie Burgis grew up in East Lansing, Michigan, but now lives in Wales with her husband and two sons, surrounded by mountains, castles and coffee shops. She is the author of four MG fantasy adventures, including The Dragon with a Chocolate Heart(Bloomsbury 2017) and the Kat, Incorrigible trilogy (published in the UK as The Unladylike Adventures of Kat Stephenson). She has also published two historical fantasy novels for adults, Masks and Shadowsand Congress of Secrets (Pyr Books 2016) and nearly forty short stories for adults and teens in various magazines and anthologies. Her first book, A Most Improper Magick (a.k.a. Kat, Incorrigible in the US), won the 2011 Waverton Good Read Children’s Award for the Best Début Children’s Novel by a British Author.