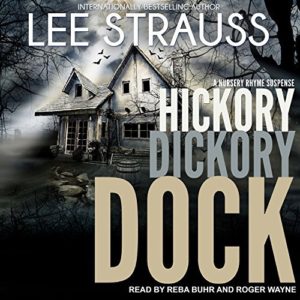 Hickory Dickory Dock is another gripping thriller in the Nursery Rhyme Suspense series.  I continue to truly enjoy this sci-fi mystery series.

After the events of the previous book, Life is But a Dream, I wasn’t sure what to expect next.  Following Sage and Marlow on their summer break wasn’t it.  However, geeks will be geeks and as Sage continued to work on her mathematical theory she finally breaks through.  In trying to consult Marlow about this latest amazing discovery, she inserts herself between Marlow and his burgeoning romance with Dakota.  Though Marlow tries to keep his distance from Sage out of respect for Dakota, all bets are off once he witnesses a murder through Sage’s “window”.

I enjoyed that we learned more about Sage and her family as well as Marlow’s.  There were quite a few discoveries, and I liked how it’s obvious their families have had an effect on them (good and not-so-good).  Marlow’s relationship with his mom is bittersweet and the discoveries made in this novel help him to heal.  With Sage’s interference, I’m not sure how Dakota and Marlow will be able to move on, but there is hope.  However, it is sad to note that Sage is feeling a bit of regret in not pursuing something with Marlow, but I liked how she is willing to let it go and work at being friends with Dakota.

The future murder mystery Marlow and Sage fall into is utterly gripping.  It was fascinating how far our world had fallen and how plausible the downfall of the United States was.  I was utterly gripped by the dystopian world that Marlow and Sage found themselves in – though how the mathematical equation could equate to a window into the future still baffles me.  However, I can easily ignore it as I was consumed by trying to figure out who the murder was as well as how they were going to get back to their own time.  It truly felt like a race against the clock.

I continue to enjoy the dual narrators and can’t imagine listening to this story without them.  They are becoming the true voices of Marlow and Sage.  I felt that both did an excellent job in not only narrating the story, but personifying the characters and enhancing the storyline.

Though I’m unsure how the ramifications of Marlow and Sage’s time jump will affect them and the future, I am eager to listen to their next adventure.  If you enjoy a little sci-fi flare to your mysteries, this is a series to try.

My Ratings:
Story: A
Narration: A
Overall: A

When the future is murder.

Before Marlow can even make his blossoming relationship with Dakota official, Sage pulls him into her new discovery – a math equation that opens a window in time and space. Then they witness a murder.

Fate pulls them into a war-torn and deserted version of Marlow’s neighborhood where they are forced to help a rebel group counterattack. The group’s ethics are questionable and Marlow has a personal reason to distrust the leader. Plus, members of their small community keep dying.

The situation is more dire and twisted than Marlow and Sage can imagine. No one is safe. No one can be trusted. They don’t even trust each other. How can they save the world, if they can’t save themselves?