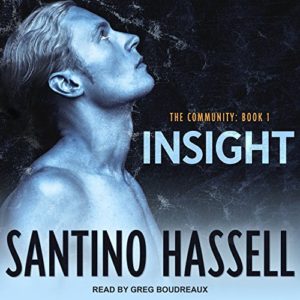 Being part of the Black Family has always been its own punishment for Nate. As the only openly gay guy in his tiny Texas high school, in addition to his family’s sketchy reputation, he was always an outcast among outcasts. After the presumed death of their mother, Nate and his brother, Theo, ought to have been as inseparable as identical twins are supposed to be, but that didn’t work out, either. But when Nate’s world is turned inside out by visions of Theo’s murder, he heads to New York for answers and discovers a secret society of fellow psychics, conspiracy theories, and more murders. Meeting Trent, a gorgeous, compassionate, protective Engineer along the way—who’s also the one person who’s ever given Nate a sense of peace—must be fate. If only he can find enough faith in himself to believe it.

Having enjoyed the entire The Community series by Santino Hassell, I admit to being a little worried about how the audiobook would turn out. Much to my delight, I really liked this version of Insight, and found that everything that initially drew me in was not only undiminished by the performance, but that even more details revealed themselves through listening. Based on a fascinating premise—an attempt at world domination with a psychic twist—there’s an awful lot to keep track of in Insight, but the narration made doing so a pleasure, and I was able to happily surrender myself to the story the author originally created.

Although he’s appearing under a different name here, I already own several titles read by Greg Boudreaux. As was the case with the others, I found his performance to be extremely enjoyable. Nate’s Texas twang wasn’t too overdone, and tended to deepen believably when he was upset or excited. The other characters were treated similarly, with Mr. Boudreaux’s inflections and tones shifting and softening almost delicately sometimes, making each character sound unmistakable and distinct.

I absolutely recommend the audiobook version of Insight for any fan of paranormal suspense, m/m romance, or if you simply like Mr. Hassell’s stories. Mr. Boudreaux treats the material very well, and I can’t fault his handling of so many different characters as they cross paths and advance the narrative. I’m excited to see if the same will continue to hold true for the next in the series.