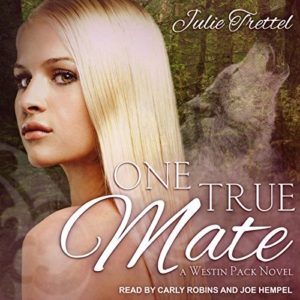 One True Mate is the first novel in the Westin Pack series – a new paranormal romance series.  Though the premise was interesting, I feel it fell a bit flat.

The mythology of the wolf shifters that Ms. Trettel crafted was interesting.  However the belief that female Alpha wolves need to be destroyed at birth was disturbing.  What I feel was more bothersome is the acceptance by the shifters that this is an acceptable practice.  I find it hard to believe that the females would blindly believe that this was okay.  Maybe if the threat of Alpha females was better conveyed, I could have swallowed plot element better.  But as it seemed, it was a belief that female alphas have no control (and some have special powers that corrupt them).

The romantic journey between Kelsey and Kyle was overall satisfying.  The romantic tensions between them as well as witty moments were entertaining.  However, the timeline of their “courtship” was a tad clunky.  We experience their meeting and then fast-forward two years.  It seems that not claiming a mate for this long is completely against the shifter culture.  It would have been interesting to see the tense interactions between them.  Or perhaps it would have been better to have the introduction be a shorter prologue to catch the reader to the now.  I just felt that due to this jump and a few others later on, the story lacked fluidity.  In a couple instances I felt that we missed some important character development/interaction.  That being said, Kyle and Kelsey’s relationship was gripping to watch develop once she understood she wasn’t a lone shifter.  They truly are well paired and I hope to see more of them in the next novel.

With the novel written from both Kelsey and Kyle’s point of view, I enjoyed having the dual narrators.  However, I felt Ms. Carly Robins’s narration was stronger than Joe Hempel’s.  It seem Carly did an excellent job of conveying Kelsey’s personality in her narration which added a depth to the story.  Mr. Hempel’s narration was a tad stiff which felt a little in contrast to Kyle’s personality.  That being said, the story was stronger for the dual narrators.

Though I was a little disappointed in this first novel in the Westin Pack series, I am still intrigued by the world as well as if Kelsey’s survival may spark a change in pack culture.  I’m also interested in discovering the next couple to be featured in then subsequent book.  I look forward to listening to the next audiobook in this series.

My Ratings:
Story: B-
Narration: B
Overall: B

Kelsey Adams is alone, and has been since childhood. Running away is all she knows and necessary to preserve her deepest, darkest secret. She can not afford for anyone to get close, or know about the monster within. But when she lands a lucrative job as an administrative assistant to Kyle Westin, CEO of the Westin Foundation, her life changes and everything’s at stake. Can she conceal her growing feelings and her true self from this enigmatic, strong willed man, or will her world fall apart?

Kyle Westin, an alpha male who always gets what he wants, has watched and waited for the little she-wolf he knows is his perfect mate to show any signs of recognition. For two years he endures her unnecessary formality and daily rejections with a patience he did not he possessed. But even Kyle had his limits…. Can he make Kelsey notice him as someone other than her boss and break down the walls she built around her heart? Or will Kelsey do what she has always done — run?