The agents of Supernatural Protection & Investigations (SPI) protect people from predatory supernaturals. This time, we’re the ones who need protection.

New York is one of the most popular convention destinations in the world—for humans and supernaturals. Every hundred years, rulers of the world’s supernatural races come together to negotiate and renew a peace treaty. Meeting in the same hotel are the governors of our world’s goblin and elf colonies. SPI is saddled with the security nightmare of keeping the living delegates alive and the undead delegates from becoming permanently deceased. We’ve got our work cut out for us.

I’m Makenna Fraser, seer for SPI. Our security nightmare becomes real when monsters from the delegates’ mythologies begin mysteriously appearing in the flesh to hunt delegates from every side of the debate. And when the hotel gets sucked into another dimension, there’s no escape.

We discover that we’re all pieces in an elaborate and deadly game. A game about to spill out into the real world. Failing to escape is game over and not an option. We have to save the world—but first, we have to save ourselves. 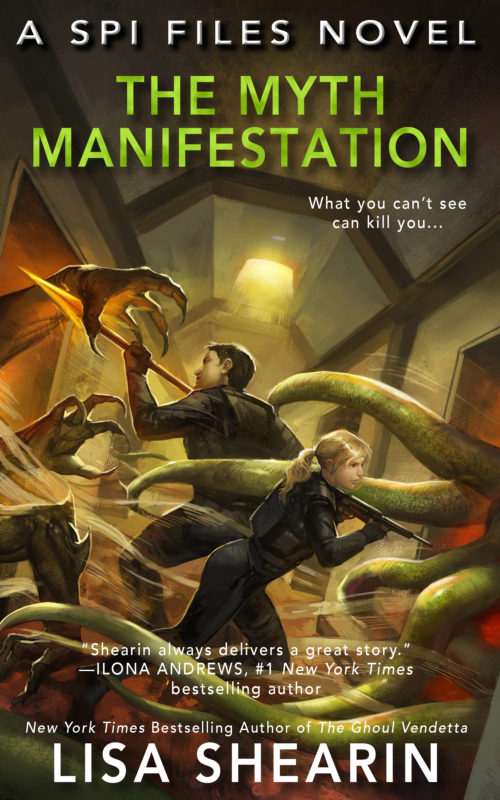 The air thickened—not like from humidity in the South, but with something that made it difficult to put one foot in front of the other. It felt as if I was trying to walk through water.

That meant magic, the heavy-hitting kind.

Something didn’t want us getting in.

Rake and his team powered up their magic, their hands glowing a bright red. A lesser glow raced to cover their bodies. Ready for offense and defense.

That something was about to be disappointed.

The Regor Regency ballroom was an intimate space by New York hotel standards. It had been built in 1893, a time when a ballroom was used for dancing. The hotel had originally been lit by gas lamps, but had soon been wired for electricity. The original gilt-framed mirrors still hung around the room, their purpose to reflect the light from the gas fixtures and any candles, to make the room brighter. A few sepia-toned photos of past soirees had been artfully framed and hung between the mirrors. Rake had had the room restored to match the Gilded Age glamor of the earliest photos.

The buka in the middle of the room was neither gilded nor glamorous.

We were all professionals here. Experience with things like what we were seeing kept us from reacting verbally to what hulked in the middle of the Regor Regency’s opulent ballroom—but mostly we didn’t want to embarrass ourselves in front of our coworkers.

That didn’t mean there wasn’t cussing. There was plenty of that.

Some from fear; mostly from disbelief.

I felt safe in saying that none of us had ever seen anything like that in our lives.

It stood up even straighter.

I winced, remembering the scene from the first Ghostbusters movie in that fancy hotel ballroom.

The monster roared and the chandeliers shook.

I didn’t see this going even that well.

I tried not to do anything that could provoke it, like breathe too loud. “You sure this isn’t a delegate who’s just not a morning person?” I asked, trying not to move my lips.

Rake never took his eyes off the buka. “Yes.”

The monster in question looked like a mashup of a rabid Chewbacca and a really pissed-off, supersized baboon.

It stank, it was angry, and it didn’t look any happier to see us than we were to see it.

To read more, please check out the author’s website: http://www.lisashearin.com