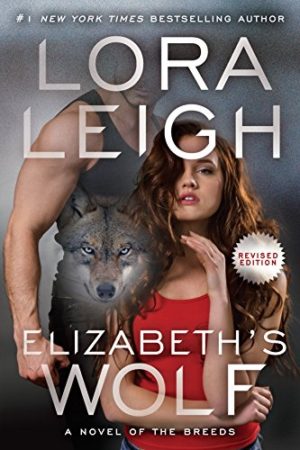 If you’ve followed by reviews for any length of time, you know I have a love-hate relationship with the Breeds series by Lora Leigh. It’s my crack – not always providing substance, but hard to quit. I started the series with Megan’s Mark (book #7), so I missed out on a few of the early, world-building titles. Berkley Publishing and the author are re-releasing Elizabeth’s Wolf, in preparation of this fall’s release of Cassie’s book (Cross Breed). Hear the cheer from fans around the world!

Dash, posing as a human solider, was injured in the line of duty, losing his men at the same time. Feeling hopeless, his world turns around when he starts receiving letters from a little girl named Cassie. He knows instantly that Cassie, and her mom Elizabeth, are his to claim, but he needs to find and save them from the bad men first.

Elizabeth escaped her good-for-nothing ex, but has been on the run for two years from the sadistic man who killed her ex in front of her daughter, Cassie. Cassie, with the aid of her invisible fairy friend, reaches out to Dash and is convinced he’ll help rescue them from the evil haunting her mother and her.

Going back in time (for me) to near the beginning, it was a fun look to see how things have progressed and changed in the Breeds series over the course of several years. I like how simple this early story is. Dash knows who/what he is, but doesn’t know about the mating issues for Breeds. He knows Elizabeth is his mate. She’s strong, and he respects that – recognizing she would need to match him and be his equal in order to fight along side of him. He is alpha, but not as much of an asshole as many of the Breeds are later in the series.

I love how tough the young Elizabeth is. She’s very weary of Dash, but knows that he’s their only hope, right now. She will do what it takes to keep her daughter alive. As the pair spend time together, they don’t fight their growing attraction and fall head-over-heels for one another. Their journey to HEA is relatively smooth, and I like that they don’t fight the mutual pull.

In the end, I enjoyed going back to the beginning. I didn’t read the original version (although I own it), so I can’t tell you what was edited or changed in this version. It follows the formulaic plots from the earlier/mid series books. The Mating Heat is still unknown and isn’t nearly as strong, and with far fewer symptoms/side effects, than later in the series. I like that Dash and Elizabeth are more equals and they work together.

For newcomers to the series – it’s an easy place to start since it is only book #3, but for fans of the series, it’s fun to go back and see how it all started before we FINALLY get Cassie’s book (although from the excerpt, I found myself a bit annoyed with her attitude.)

The series was my crack at one point, and if the author had continued to keep the books a bit more straightforward and clean, like this one, I probably would still be sucked in.

She brought him back from death and made him live again.

Dash thought himself alone, a soldier, a fighting machine and no more.

Elizabeth made him realize he was a man.

Danger surrounds the woman his soul marked as his mate, death and blood and a treachery that goes beyond even his worst nightmares. But he will protect her and what she claims as her own. He was created to kill, trained to do it efficiently, and only a man bound to her, heart and soul, will have the strength to save Elizabeth and her prized possession.

He is a lone wolf. A man alone. No pack, no family, no one to call his own until one single, innocent letter awoke Elizabeth’s wolf.