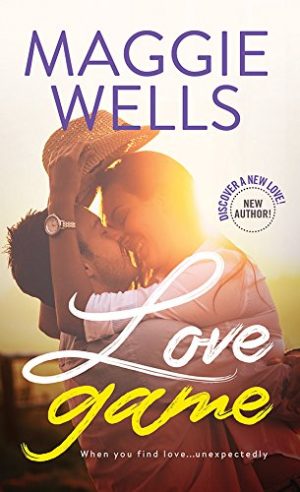 I am so the target audience for the this book, I feel like I need to issue a disclaimer upfront.  Love Game, the first book in Maggie Well’s Love Games series takes on love, women’s sports, and broadcasting.  I was a journalism major, played not one, but two sports in the NCAA at a D-1 school, and coached professionally for over fifteen years.  As far as I’m concerned, Wells wrote this one for me. That being said, any woman who loves a smart, driven, dedicated, take-no-prisoners heroine, will love Kate Snyder.  She puts the “hero” in heroine as she fights for her job, her players, women’s sports, and the love of her life.

Kate, openly inspired by Pat Summitt, is a four time NCAA national women’s basketball champion coach.  She’s a former Olympian in her own right, but there’s that caveat that rankles all female athletes the world over, “women’s” fill-in-the-sport.  Billie Jean King may have proved our point when she beat Bobby Riggs, but ultimately that didn’t have much effect on funding, did it?  Even in 2017, the big bucks still go to men’s sports.  I can’t tell you how many times I heard about how the men’s sports, especially football, fund the women’s sport programs. But I digress… Even women who aren’t in the athletic industry will appreciate and relate to the fight women have in male dominated work places.

Kate’s love story with Danny McMillan was hot and steamy, but almost secondary.  Wells could have left out the explicit scenes and still had a solid story. What they add is a demonstration of the intensity of these two characters, consistent in all parts of their lives.  In that way it makes them more authentic.

As indicated in the description, Love Game has alternating points of view.  It is my preferred format in the contemporary romance genre as we get let into the what each character thinks about the other and when. Maggie Wells is a new author for me and her writing style is tight. She has intentionally inserted a fun sportscaster-like lingo and zingers into her characters’ dialog. Their banter is as competitive as their personalities and it creates heat.  Blessedly, they know when enough is enough.  It’s not about always having the last word or the harshest barb.  Wells never crosses the line over into mean.  By the end I was as in love with these characters as they were with each other.

Kate Snyder is at the top of her game. She scored her first national championship at Wolcott University in her undergrad days, and now she’s the coaching legend of the #1 college women’s basketball team. No one knows the meaning of the phrase “work your way up” better than Kate. So when the university hires a football coach trying to escape scandal―paying him a lot more than she earns―Kate is more than annoyed.

Danny McMillan had hoped for a smooth transition at Wolcott, but the fiery Coach Snyder made that impossible. Every time he and Kate are in a room together, snark and sparks fly. Danny gets her frustration, but her pay grade isn’t his problem, right? When Kate and Danny finally see eye to eye, their sparks turn into something even hotter…and they need to figure out if this is more than just a game.