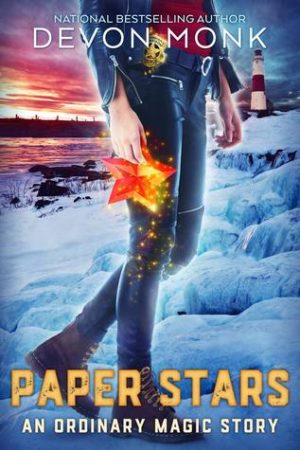 We absolutely love the world of the Ordinary Magic series.  Gods, monsters, and legends all exist and vacation in Ordinary, Oregon. In this novella, we catch up with Delaney and her boyfriend Ryder. Although we have not been fans of Ryder, in this story he truly redeems himself.

In the first three books in the series, we thought that Ryder lost the right to call Delaney his. She repeatedly forgave him and gave him chance after chance.  He wouldn’t heed her advice and he didn’t appreciate her.  By the end of the third book, Gods and Ends, we accepted their relationship, but still thought that Delaney could do a bit better.  Ryder finally proved to us in this novella how much Delaney means to him and that he does love and value her.

Although the plots of the missing penguin, demon deals, and an unusual gift are woven into the story, it’s the plight of Ryder lost in the storm that is the focus. We loved the humor that is characteristic of this series and will never forget the oinking dragon.  If you are intrigued, you should read the series.

All in all, this was a delightful slice of life from the world of Ordinary Magic.  We are happily satisfied with Delaney and Ryder’s story and eagerly look forward to the next novel in this witty and compelling world.

One magical holiday. Some assembly required…

Police Chief Delaney Reed loves the holidays in Ordinary, Oregon, the beach town where gods vacation and monsters reside. But this year, she has a lot on her plate. It isn’t just the creature who follows her home, or the terrible storm barreling toward town. It isn’t that Mrs. Yates’s penguin has been stolen. Again.

It’s that her boyfriend, Ryder Bailey, has been gone for two months and is growing more distant. She’s beginning to think she knows why.

But when a demon, a dragon, and a god bearing unusual gifts get thrown on top of her to-do list, Delaney decides to roll up her sleeves and make this holiday unforgettable. One disaster at a time.