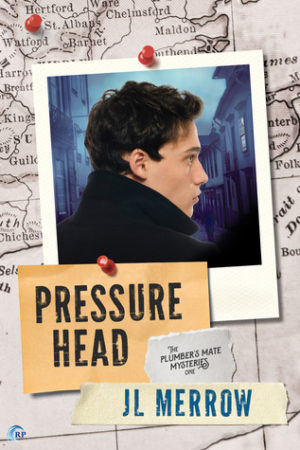 I was immediately curious about Pressure Head based on the premise alone: a plumber who has an affinity for water, uses his “gift” that causes him to be drawn to “hidden things” to find clues—and dead people. Tom won me over quickly, his funny (and often snarky) observations combining with his inability to keep himself out of trouble to make him a generally lovable character. As the sole narrator, his perspective did a lot to counter the more significant issues that I had with the other MC, Phil, and trusting Tom with his own choices made the romantic aspects of the story easier to accept as the narrative progressed.

Despite such an intriguing framework and Tom’s winning personality, I never felt the same for Phil. While it is absolutely true that people change, and that Phil was right to apologize for his role in the worst parts of Tom’s past, his “second chance” got off to a bad start for me, some of those negative traits seeming to have stuck with him into adulthood. He is at once dismissive and controlling, and engages in some victim blaming that didn’t endear him to me. I understand the likely intent, though—we have to do better collectively to accept others as they are. I did like Phil more by the midway point, however, and it’s hinted that we’ll learn more about him in the future, which I’d like to see.

Something that I enjoyed tremendously about Pressure Head was the cast of secondary characters, Tom’s best friend Gary and his new boyfriend Darren, most especially. These two are among my favorite characters ever, I think, and I was delighted each time they made an appearance—particularly during their post-service discussion outside a local church. Others, including Edith and Pip, also threatened to steal every scene they’re in, and allow Tom to shine even more as an incorrigibly charming flirt. And although theirs isn’t a comedic presence, Merry the vicar and Graham Carter are differently powerful entities that left a strong impression in their own right. Of course, the cats—Arthur and Merlin—have to be given their due, as well.

What Pressure Head lacked in romance it made up for in the whodunit itself. It’s a mystery, after all, and Merrow serves up a good one here. Not overly complex, it doesn’t try too hard while being highly entertaining at the same time. There were some parts that didn’t quite work, and one tragedy, specifically, that crushed me, but I thoroughly enjoyed watching Tom put the pieces together. I also liked the effect his persistence had on both Dave and Phil’s nerves.

Funny, often sweet, and sometimes over-the-top, the aptly titled Pressure Head was a good introduction to what I hope will be a solid collection of mysteries. Tom is a wonderful narrator, and, while I was never fully convinced about how he and Phil fit, I found it to be extremely easy to be on his side. In the end, it was enough just to want Tom to be happy. With the addition of some truly remarkable secondary characters, Pressure Head shines on many levels. Having missed their initial release several years ago, I’m enjoying myself a great deal so far, and am looking forward to seeing what else Tom and Phil get up to next.

Some things are better left hidden.

Tom Paretski’s not just a plumber with a dodgy hip courtesy of a schoolboy accident. He also has a sixth sense for finding hidden things. Called in by the police to help locate a body near Brock’s Hollow, he’s staggered to encounter Phil Morrison, his old school crush—and the closeted bully whose actions contributed to Tom’s accident.

Phil’s all grown up now, and Tom’s unwilling attraction to him is back with a vengeance. Phil’s now openly gay—and what’s more, he’s interested in Tom’s personal charms as well as his psychic talents. As a private investigator called in by the dead woman’s parents, Phil is sceptical about Tom’s unusual gift, but nevertheless quick to spot its potential to aid him in his work.

The further they go with the investigation, the less they can ignore their shared past, and the more the pressure and the heat build between them. But Tom isn’t certain he wants to know the secrets he’s helping to uncover, while there’s a murderer on the loose who won’t hesitate to kill again—and this uneasy couple is moving right into his sights.